The Upper Zora's River is a location in Twilight Princess.[1] 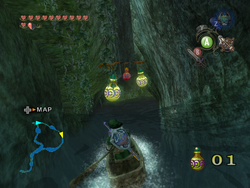 Upper Zora's River is the location of one of Link's early battles with the Shadow Beasts in Hylian form. When they fall from the Twilight Portal, Iza, the owner of the boat rental shop, who is standing nearby, will give a scream.[2] After the young hero defeats the shadowy messengers, she will be impressed by Link's bravery and let him into her hut.[3][4] Once inside, she will request that Link aid her by clearing the river downstream of a rockfall preventing it from flowing.[5] If he agrees to remove the debris that has clogged the flow of the river, Iza will lend Link a Bomb Bag and fill up his quiver with arrows.[6] By shooting the rocks that are visible from the hut's interior, the young hero will be able to row down the rapids and clear the rest of the rocks that are blocking the waterflow. Once Link reaches Lake Hylia, Iza's assistant, a Zora who guides the young hero through the rapids, will allow the young hero to keep the Bomb Bag that Iza lent him.[7] After clearing the river and returning to Upper Zora's River, Link can play the Rapid Ride minigame, where he will again use Bomb Arrows to hit targets, but instead of rocks, Iza has placed large pots for him to destroy, allowing Link to win a Giant Bomb Bag if he scores 25 or more points.[8]

Iza's sister, Hena, also resides in Upper Zora's River. Hena runs a Fishing Hole where Link can go Fishing. Link can bobber fish without charge in the Fishing Hole,[9] or he can rent a canoe from Hena for a small charge and go lure fishing instead.[10] Hena also gives Link a chance to test his skills in the game of Rollgoal, which she invented herself.[11]

Additionally, a Howling Stone can be found in this area.

Rivers in The Legend of Zelda series
Retrieved from "https://zelda.fandom.com/wiki/Upper_Zora%27s_River?oldid=794535"
Categories:
Hidden categories: