It has been suggested that the portion of this page concerning Gargantu-Bug should be made into its own page. Should the target page already exist, this content should be merged into it where appropriate. Discuss this on article's talk page.
Ambiguously Canon Information 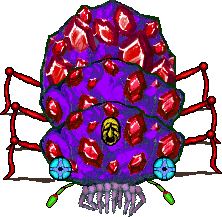 Ultra Death Bug is the boss of the Insect Cavern in Freshly-Picked Tingle's Rosy Rupeeland.

Ultra Death Bug is a stronger variant of the Death Bug, featuring a purple body instead of a golden one, adorned with numerous red Rupee-like crystals.

The fight also plays out similarly to that of the Death Bug, complete with Teddy Todo once again acting as Tingle's Bodyguard by defeating the Ultra Death Bug's spawn. Tingle must defeat the Ultra Death Bug by dropping three Tingle Bombs on its face.

After it appears that Tingle has defeated Ultra Death Bug, its remains will suddenly morph into a new monster, known as the Gargantu-Bug. This form is much larger, stronger, and faster, taking five more bombs to truly defeat. When defeated, its body will yield 40,000 Rupees and the Earth Rupee.[1]

Insects in The Legend of Zelda series
Community content is available under GNU Free Documentation License unless otherwise noted.
Advertisement