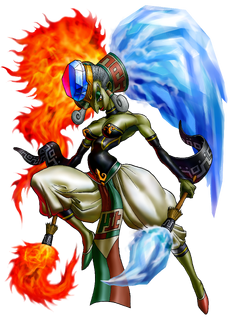 Twinrova artwork from Ocarina of Time

Yayoi Jinguji
Kotake and Koume,[4] collectively known as Twinrova,[5] are a recurring pair of Gerudo twin witches in The Legend of Zelda series. They are known as the Sorceress of Ice and the Sorceress of Flame, respectively.[1][2] As the surrogate mothers of Ganondorf, they are among his more devoted servants.[6]

In Ocarina of Time, Kotake and Koume are a pair of 400-year-old twin witches who secretly lead the Gerudo tribe,[7][8] and are the surrogate mothers of Ganondorf.[1][2] They maintain their long lives by using their powerful magic.[9] They both have green, wrinkled skin and dress in black robes with white Gerudo patterns near the hems, with an obi-like belt around their waists. Kotake's association with ice is noted by a blue jewel on her forehead and blue slippers. The markings on her headband are in red with a blue border, whereas these distinctions are red on Koume to highlight her association with fire.

They first appear outside the Spirit Temple just after child Link obtains the Silver Gauntlets. They kidnap Nabooru, who they subsequently brainwash and dress in an Iron Knuckle armor.[10] After adult Link defeats her, he fights Kotake and Koume inside the boss room of the Spirit Temple. After being defeated, halos appear over their heads and they are absorbed by a column of light,[11] presumably passing to the afterlife.

Koume tends to act as the leader of the two, usually appearing first and deciding what their course of action should be. She is the first to introduce herself during the boss battle and is also the one who formulates the idea of combining with Kotake to form Twinrova.

The boss room where Twinrova is fought has four small platforms surrounding a larger central platform. Link must climb the central platform in order to trigger the battle. Kotake and Koume emerge from the smaller platforms before circling above him, then flying off in different directions.

Kotake and Koume fight using magic bolts of the elements from which their respective powers are derived. Using the Mirror Shield, Link is able to redirect the attacks of one sister against the other. After taking a total of four hits, the pair will use their "Double Dynamite Attack" and merge into Twinrova, a single being with the combined powers of both witches.[12][13][14][15]

After the transformation, the Mirror Shield remains essential in winning the battle. Link is able to use it to absorb the power of both the fire and ice spells. He is required to collect three consecutive charges of one type of spell, which allows him to release the spell back at Twinrova. However, since Twinrova frequently alternates between fire and ice attacks, care must be taken to only block attacks of one type at a time. Blocking a fire attack followed by an ice attack, or vice versa, will cause all power currently stored in the Mirror Shield to dissipate.

Once Twinrova is injured by the reflected attack, she collapses on one of the four outlying platforms, allowing Link to attack with his Sword. After enough damage is dealt, Twinrova will be defeated, at which point she splits back into Kotake and Koume. The two witches intend to keep battling,[16] but soon realize that they are already dead.[17][18] They then enter a comical argument about whether they were twins or not due to Kotake claiming she was two decades younger than Koume while ranting about how they're not ready to die,[19][20][21] before eventually threatening Link with coming back to haunt him.[22]

The sisters appear in Majora's Mask, though in stark contrast to Ocarina of Time, they are not evil and help Link on his journey.

In Majora's Mask, Kotake is the owner of the Magic Hags' Potion Shop,[23][24] where she sells Red, Green, and Blue Potions. However, she does not sell Blue Potions immediately, as she requires a Magic Mushroom in order to make them. If Link offers her one, she will make a free Blue Potion for him.[25] The Blue Potion becomes available for purchase for the remainder of the three days.

When Kotake hears that Koume was attacked by the Skull Kid in the Woods of Mystery, she gives Link a Bottle of Red Potion to deliver to Koume.[26] If Link does not help after the First Day, Kotake will leave her shop and proceed to the Woods of Mystery to search for Koume herself.

Koume is the guide of the Boat Cruise.[27] She occasionally goes into the Woods of Mystery to look for mushrooms for Kotake to use in her Potion Shop.[28] One day, she ran into the Skull Kid and was injured.[29] Link is sent by her sister to find her in the nearby woods. Upon being discovered, she asks Link to heal her with a Red Potion.[30] If Link tries to give her a Potion in any form other than his human one, she calls him a "weirdo" and tries to avoid his attention by playing dead.[31] After Link gives her the Potion, she returns to her post at the Swamp Tourist Center, where she gives Link one free tour in return for healing her.[32]

In Oracle of Ages and Oracle of Seasons, Kotake and Koume send Veran and General Onox to cause chaos and light two of the three flames needed to resurrect Ganon; the Flame of Sorrow and the Flame of Destruction.[33][34] They appear as a disguised old lady to dissuade Link from his quest,[35] revealing themselves when he reaches the final dungeon.[36] In a Linked Game to either Seasons or Ages, they show up to taunt Link and his allies in Labrynna before leaving[37] or rub the Flame of Destruction being lit in his face after he completes Unicorn's Cave.[38] Once the flames are lit, the two kidnap Princess Zelda to light the final flame, the Flame of Despair, by sacrificing her.[39] In a Linked Game, Link fights the sisters both individually and as Twinrova. After Link defeats Twinrova, she chooses to become the vessel for the ritual herself instead of Zelda, so that Ganon can return.[40] Unfortunately for the pair, their sacrifice is in vain as it only allows a mindless, raging Ganon to come forth.[41]

Twinrova casts magical projectiles at Link that he must deflect back at them. However, Link must use his Sword to deflect them rather than his Shield. The Mirror Shield, an upgrade that can only be attained in a Linked Game, can only protect him from their magic attacks. After the sisters have taken three hits, they fuse together and become Twinrova.

Twinrova alternates between two phases of attack, which affect the room around her and Link. In her cold phase, the room's floor is covered with slippery ice and Twinrova materializes spiked ice crystals that she launches at Link and which ricochet off the walls. In her fire phase, parts of the floor become lava pits and Twinrova launches fireballs. Link must strike Twinrova with his Sword several times to stun her, and once stunned, he must use a Mystery Seed to actually damage her.

Kotake and Koume first appear alongside the Gerudo and an Iron Knuckle after Ganondorf realizes he was tricked with the Fairy Ocarina 7 years ago. Their first speaking roles are in the chapter "Shadow Guide:Shiek", where they convince Ganondorf to allow them to brainwash Ingo so they could lure Link into Lon Lon Ranch (as Ganondorf initially planned to have Ingo executed for his failure to keep Epona around long enough for Ganondorf to acquire her). They later witness Link slipping the crystal out of Ingo's ear, revealing the reason for the Gerudo tribe's brainwashing and hostile behavior in the Adult timeline. Later, they disguise themselves as fortune tellers when Link stocks up for the trek into Gerudo Desert telling him he would find the one he seeks by entering the Spirit Temple. After a brief questioning of Shiek's true loyalties to Ganondorf, they have Nabooru work with the Sheikah to capture Link and find out if he really is a traitor, which the Sage of the Temple agrees while one of the witches creates a sandstorm to make Link's journey into the desert more difficult. Afterwards, they confronted Shiek over "his" treachery (as he initially seemed to attack Link, only for him to save Link), making the ninja reveal he was never one of them and flees with Link on Epona fending off Lizalfos and Moblins the Gerudo witches summon. Later when Shiek reveals himself to be Zelda, they attack and demand the Hero of Time to give them the Princess. Link defends Zelda with his Hylian Shield against Koume's flames, but almost gets burned to a crisp until Nabooru gives Link the Mirror Shield, allowing the Hero of Time to give the witches a taste of their own medicine. They die, while cursing their own loss and vow for the King of Evil and their surrogate son to avenge them.

In Super Smash Bros. Ultimate, they act the same as in SSB4|3DS, however their graphics are more improved. If the Gerudo Valley stage is set to Battlefield or Final Destination design, they will not appear at all.

Twinrova is a modified version of the characters' Japanese name ツインローバ (Tsuinrōba).
Their individual names come from the Japanese mystery novel 八つ墓村 (Village of Eight Gravestones). In it, a pair of elderly twin sisters bear the names Kotake and Koume.[44]
Kotake come from 小竹 (Kotake): 小 (ko) and 竹 (take).
Koume comes from 小梅 (Koume): 小 (ko) and 梅 (ume).