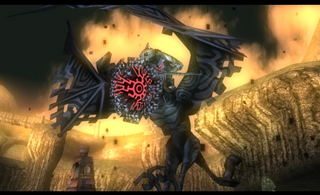 The Twilit Carrier Kargarok is a mini-boss in Twilight Princess.[1] It is a gigantic Shadow Kargarok ridden by a Twilit Bulblin Archer.

When Wolf Link and Midna first arrive in the nearly empty Lake Hylia covered in Twilight, they find a Twilit Bulblin Archer. When Wolf Link attempts to confront the Bulblin, it uses patch of Hawk Grass to summon and mount the Twilit Carrier Kargarok.[2]

The Bulbling attacks with fiery arrows while riding the Kargarok.[3] To attack it, Wolf Link must wait until the bird gets close to the ground and then jump on it. After doing so, he can then proceed to rapidly bite the bird. If Wolf Link does not avoid or attack the Shadow Kargarok when it comes down, it will grab him with its talons and throw him down, causing one full Heart of damage. After the Bulbin falls to the ground, Link must battle it with physical attacks. If he does not defeat it fast enough, the Bulblin will return to its mount. Once the rider is defeated, Midna will take control of the bird so that she and Wolf Link can fly to Zora's Domain.

Link can use the Twilit Carrier Kargarok at any time to travel upriver by using the Hawk Grass while in wolf form. It can also be used to travel downstream by summoning it from the reeds near the Zora's Domain Howling Stone. Once the Twilight is removed from the area, a giant Kargarok appears in its place. It only travels upstream, however.