Not to be confused with Twilit. 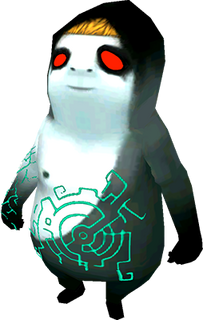 The Twili are a race of shadow beings who inhabit the Twilight Realm in Twilight Princess.[2] Although usually a peaceful tribe, the Twili are transformed into hideous creatures known as Shadow Beasts by the Usurper King Zant and used to invade Hyrule. Link is able to return several of them back to their normal forms when he encounters them in the Twilight Realm. He is even aided in his quest to stop Zant by Midna, a Twili and the princess of the Twilight Realm.

The Twili are descendants of a tribe of Hylian sorcerers from Hyrule,[1] who are referred to as Interlopers. Eons ago, the Interlopers were condemned to the Twilight Realm by the Golden Goddesses of Hyrule as punishment for their misgoverned attempt to use magic to claim the Triforce.[3][4] Their old magic became known as the Fused Shadow, an instrument of dark power.[5] However, during their failed attempt to conquer the Sacred Realm, their Fused Shadow was split into four pieces and scattered throughout the Twilight Realm and Hyrule. The tribe lived and evolved in the Twilight Realm for centuries in isolation, mere shadows of what they once were, as over time they became accustomed to their surroundings and came to accept their fate.[6] While some learned to love the beautiful peace that could only be found in Twilight, others felt that they were being oppressed by the people of the Light World.[7] The Twili lost their most powerful abilities but they still possess some magical power and teleportation is possible for the strongest Twili.[1]

The Twili's leadership structure was built around the Twili with the strongest magical abilities.[1] After centuries of rule, the Twilight Princess Midna became one of many rulers in a long line of royalty. It was around this time that a rebel force grew from within the Twilight, spearheaded by Zant. It is revealed that Zant believed that he was the heir apparent to the throne, but the position was passed over.[8] The royal family had made this decision as Zant's ambitions reminded them of why their ancestors, the interlopers, got sealed in the Twilight Realm in the first place.[9] Distraught, Zant ran outside the Palace of Twilight to vent his frustration. In the midst of Zant's exasperation, Ganon appeared to him and stated that he would lend him his power to take over the Twilight Realm and Hyrule.[10][11] In a fit of rage, Zant used this power to transform most of the inhabitants of the Twilight Realm into monsters and, as a form of humiliation, transformed Midna into an imp creature. Midna's only hope was to find the magic of her ancestors, the Fused Shadows, and use it against Zant to save the realm and her people.

The Twili are usually seen as enemies, but when Link goes to the Palace of Twilight, he reverts several of the Twili to their true forms.

The Twili have glowing markings on their skin, which is black and pale bluish-gray in color. This complexion may be due to lack of full light as the Twili transformed after they were ejected from the World of Light. They also have oval eyes that are normally red, yellow, or orange. They are usually quite thin and much taller than Hylians.

The Twili rarely speak, with most choosing to only communicate with their fellow Twili.[1] The distinct markings on their chests signify their clan.[1]