This article is about the Dungeon­. For other uses, see Turtle Rock (Disambiguation). 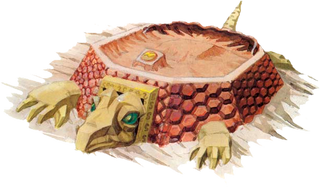 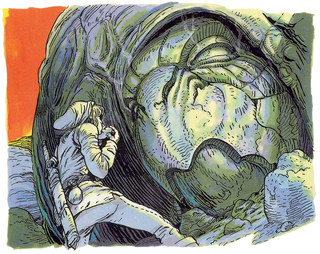 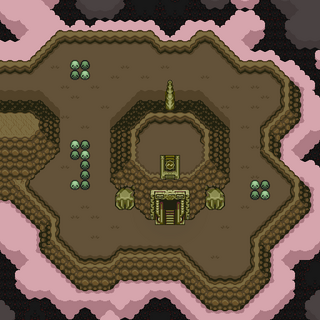 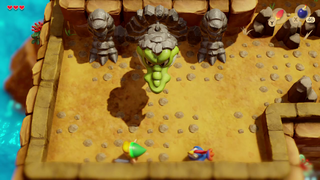 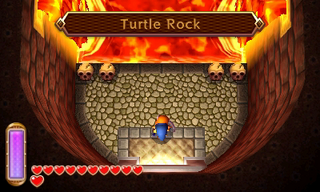 Turtle Rock guide
at StrategyWiki
A Link Between Worlds

Turtle Rock is a recurring dungeon in The Legend of Zelda series.[1][2][note 1]

Turtle Rock is the seventh Dungeon in the Dark World and the eleventh in the whole game. It can only be accessed by using a Warp Point on the eastern peak of Death Mountain. This will warp Link to the roof of the Dungeon, where he must use the Quake Medallion to open the entrance. The exterior of Turtle Rock was carved into the shape of a Turtle by inhabitants of the Sacred Realm prior to Ganon's rule.[4]

This Dungeon is unique in that its interior looks more like an incredibly extended cavern, instead of having a man-made architecture; likewise, the Cane of Somaria (previously won in Misery Mire) shows a new function here: it creates platforms that can travel across floating rails, which help Link to fully explore this Dungeon, as well as to find torches that must be lit; this also means that a lot of magic power is required (in fact, Sahasrahla advises Link to have magic at the start of the Dungeon).

Some interesting references to the Mario series occur here as well: Chain Chomps make their debut, and warp pipes carry Link from spot to spot. Similar to the Skull Woods, there are multiple exits, one of them even leads Link to an apparently empty dead end, but guards a Piece of Heart in the Light World. But there's more: this is the only location in the game with lava, and it's harmless since Link cannot fall into it. This Dungeon houses the Mirror Shield, useful to repel more powerful projectiles, and the final crystal (containing Princess Zelda) is guarded by Trinexx.

After Link clears this tough Dungeon, he can access the final Dungeon, which is to the west, across a bridge guarded by Lynels (where the Tower of Hera would be in the Light World).

To reach the Dungeon, Link has to travel through several caves from the center of Tal Tal Mountain Range. He eventually encounters a Flame Fountain, preventing him from going any further. However, by using the Mirror Shield, obtained in Eagle's Tower, Link manages to get past the fireballs unharmed. Upon reaching Turtle Rock's entrance, he finds that its entrance is a cave guarded by two Dactos and Turtle Rock itself, dormant. By playing the Frog's Song of Soul, the stone head springs to life and starts attacking Link.[5] Defeating Turtle Rock opens the entrance to the Dungeon.

The Dungeon appears to be a volcano, as there are many lava pits scattered throughout it. The walls are red and the floors are yellow. There are two rooms which connect to the peak of the western Tal Tal Mountain Range, and exiting and reentering the Dungeon is necessary to proceed. A recurring puzzle in this Dungeon involves the use of flashing blocks which create land when pushed over holes or lava. In some rooms, it is only necessary to create a path, while in others, covering all of the holes makes a Treasure Chest appear.

This Dungeon is notable for the fact that it features many previously encountered mini-bosses as enemies, many which have to be defeated for a Small Key or to move on. These include Rolling Bones, Hinox, Dodongo Snakes, and Smasher. These mini-bosses effectively act like normal enemies, as they will reappear at a later time. Cue Ball, another previous mini-boss also appears but does not reappear upon its defeat unlike the others. However, the true mini-boss of this Dungeon is Blaino, a creature which uses its boxing gloves to hurt Link and send him to the entrance of the Dungeon.

Some passageways defy the predominant fire theme of the Dungeon, as they are frozen and have ice blocks. The main tool of this Dungeon is the Magical Rod, which is necessary to burn away the ice blocks and to defeat the Dungeon's Boss, Hot Head, a giant fireball that lives in a pool of lava.

When viewed on the Map, the Dungeon is in the shape of a turtle, which fits the appearance of the exterior of this Dungeon.

Turtle Rock is located in the southeastern corner of Lorule. The nearby Mama Turtle needs her three babies, which are located throughout the lake. Link must use the Zora's Flippers to get them back to their mother. After completing this task, the turtles will create a platform for Link to ride to the dungeon's entrance.

The dungeon is based on warp points, which teleport Link to different places in Turtle Rock. Although Turtle Rock is small in size (two floors shaped to resemble turtles), it requires many small keys for it to be completed. The dungeon features lava, which can be controlled easier with the Ice Rod. Freezing eruptions of lava allows Link to Wall Merge and get to the opposite side. The Ice Rod also allows Link to freeze teeter-totter type platforms in place. The dungeon utilizes switches to make platforms rise above the lava and open doors. Another main theme of the dungeon is climbing higher along the side walls, allowing Link to turn into a painting and reach previously inaccessible platforms. Turtle Rock is populated by Kodongos, Wizzrobes, Gibo and fiery Swamola. The miniboss of this dungeon is a group of five Fire Gimos, one large and four small.

The Compass is in the very center of the first floor. Link must activate all four switches on the corners of the platform to reveal the chest. The Big Key is in the central northern room of B1, on a high level grate. Link must wall merge to the door that accesses the grate level, and have a key to open it.

This dungeon also contains the Hylian Shield, which operates in much the same manner as the Mirror Shield does in previous titles, namely, reflecting beams and fire from enemies such as Beamos and Lynel. The Shield can be acquired directly after getting the Big Key by un-merging from a wall to push over a grate bridge in the central room of B1. The grate is right outside the entrance to the Big Key room, on the northern end of the central room. Crossing the grate bridge leads to the Hylian Shield's chest.

Additionally, two warp tiles on the first floor can take Link to alternate exits that are otherwise off-limits. Both exits lead outside onto small balconies, where Link can summon Irene by using the Bell. The east balcony is surrounded by Fairies, while the west one leads to a Piece of Heart.

Turtle Rock is also featured in the A Link to the Past comic by Shotaro Ishinomori. Like in the game, Turtle Rock is the Dungeon where Princess Zelda has been imprisoned in a crystal by Agahnim.

After learning the location of Turtle Rock, Link heads there and strikes the top of it with the Master Sword to allow a lightning bolt to hit it, revealing the entrance. Inside the lava-infested Dungeon,[6] Link finds Zelda imprisoned in a crystal,[7] but he is then attacked by a three-headed dragon.[8] However, Roam, who had been following Link,[9] arrives just in time to save the young hero from one of the dragon head's attacks. Roam and Link then cut off the dragon's ice head, causing its ice and fire to mix and explode.[10] The explosion shatters Zelda's crystal, and with the princess now rescued, the group quickly escapes Turtle Rock as it begins to collapse.