Zelda Wiki
Register
Don't have an account?
Sign In
Advertisement
in: Reptilian Enemies, Bosses, Bosses in A Link to the Past,
and 3 more 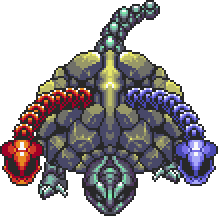 Trinexx is a recurring Boss in The Legend of Zelda series.[1] It is the Boss of Turtle Rock in A Link to the Past and the last dungeon in Ancient Stone Tablets. Its name may be derived from the prefix "tri-" meaning three, and the word "necks," alluding to its three heads. Its first form is a stone turtle with two additional heads protruding from its shell on either side. These extra heads are elemental; the red one spouts flame and the blue one breathes frost.

In order to defeat Trinexx, Link must use the Fire Rod on the blue head and the Ice Rod on the red head to stun them. When using items like Rods that consume high amounts of magic, Link can use blue or green Potions to regain his magic as needed. After stunning the heads, Link can attack them with the sword to destroy them. After the blue head is destroyed, Link will no longer have to walk on the ice it emits. While attacking, Link must dodge its main head to avoid taking damage, which lashes out at him. After both extra heads are gone, Trinexx then withdraws into itself and its shell will explode, before emerging in a giant snake-like form with a glowing orb in the center of its body. In this form, Trinexx attacks Link directly with its body. To finish the Boss, Link must strike the orb three times. Once Trinexx is defeated, Link receives another Heart Container and the crystal containing Princess Zelda.

In the A Link to the Past comic by Shotaro Ishinomori, the monster fought in Turtle Rock is a three-headed dragon with a grey head, a red head that breathes fire and a blue head that breathes ice. Though the three heads and their powers are a reference to the game's boss, the dragon is never called Trinexx. When Link arrives to Turtle Rock to rescue Princess Zelda, he is attacked by a Trinexx.[2] However, Roam, who had been following Link,[3] arrives just in time to save the young hero from one of the dragon head's attacks. Roam and Link cut off the dragon's ice head, causing its ice and fire to mix and eventually explode.[4]

In the A Link to the Past manga by Akira Himekawa, Agahnim kidnaps Link's companion Ghanti while on his way to Turtle Rock, and takes her to Ganon's Tower. There, he uses his magic and her negative emotions to transform her into Trinexx, who he unleashes on the hero when he arrives at Turtle Rock.[5] The monster fails to follow Agahnim's commands correctly however, and Link defeats the monster easily. Only after striking it down does Ghanti return to her true form, battered and badly wounded.[6] Enraged at Agahnim's trickery, Link begins to turn into a beast by letting his emotions get out of control and loses the ability to wield the Master Sword, as was Agahnim's plan all along. The transformation is halted however by Princess Zelda, who breaks free of her Crystal prison by herself. Ghanti is then healed by the enchanted Apple Link had been carrying.