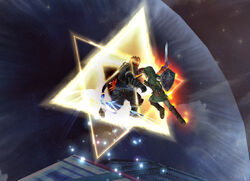 When Link, Toon Link or Young Link pick up the Smash Ball, they gain the ability to unleash a Final Smash. When activated, the Triforce on the back of Link's hand glows, and if hits an opponent, it traps them as Link repeatedly slashes him or her with his Sword. Each strike deals 4% or 5% of damage depending on the range. During the fifteenth strike, all the opponents trapped in the attack but the primary target are ejected. The final seventeenth strike causes 18% of damage with a high knockback. The Triforce Slash can cause a total of 83% of damage in Super Smash Bros. Brawl and 69% in the Nintendo 3DS and Wii U versions.

Although both Final Smashes deal the same amount of damage, the range and knockback of Toon Link's attack is shorter than Link's.