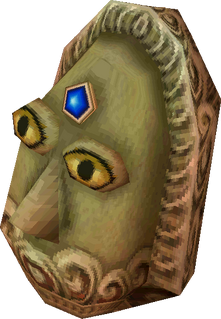 Sacred Windmill
Tribal Head Statues are recurring Objects in The Legend of Zelda series.[name reference needed] They are mostly involved in puzzles and riddles which Link must solve in order to gain access to new areas or treasures.

In Phantom Hourglass, Link first encounters a Tribal Head Statue in the northern part of Molida Island. Here, he must activate the three statues scattered around and focus their light beam on the entrance of the Temple of Courage, which will grant the hero access to it.[1]

A single Tribal Head Statue is also located in Mercay Island near the Temple of the Ocean King. To access it, Link must go through a cave which will take him to a higher portion of the island. Once again, Link can activate the statue's ray of light by hitting it with his Sword. By shining the beam parallel between the Temple of the Ocean King and Mercay Island, the Tribal Head Statue will reveal a bombable wall in the direction of its ray.[2]

In Spirit Tracks, Tribal Head Statues first appear in the Forest Sanctuary. They are located at each of the five sanctuaries scattered throughout the five different realms of New Hyrule. They are involved in puzzles that must be solved in order to gain access to the Lokomo sage that guards its respective sanctuary and realm. Puzzles include connecting the two statues that are facing each other to solving a riddle concerning the Door of Friendship.

There are also four giant Tribal Head Statues placed around the Sand Realm, whose gazes cross where Link should bomb in the Sand Sanctuary to reveal the entrance that leads to Rael.[3]