Trial of the Sword

It has been suggested that this article be moved to Sword Monk's Shrine.

Trial of the Sword 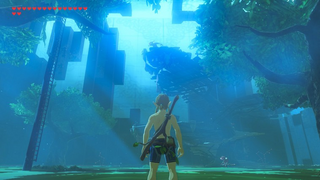 Permanently awakened Master Sword
The Trial of the Sword,[1] also known as the Sword Monk's Shrine,[name reference needed] is a challenge and mini-dungeon in Breath of the Wild added in The Master Trials DLC Pack.

The Trial of the Sword can be accessed from the Korok Forest by placing the Master Sword back in its pedestal. If the Master Sword is out of energy, the Trial cannot be accessed.[2] During the challenge, Link will go through a series of floors and must defeat every enemy on a floor to proceed to the next one. At the start of the Trial, he is stripped of all of his weapons, Shields, Bows, Arrows, Armor, Materials and Food. Link is able to use any of the Runes during the Trial, but he is not able to use any Champion abilities. Link begins the Trial with the same amount of Hearts, Stamina and temporary boosts that he had when entering, even with Hearts lost from damage or temporary Hearts. The Trial of the Sword is divided into three sets of floors. Once a set is completed, it can be skipped during future attempts of the Trial; however, Link will begin empty handed when resumed and any item gathered during the challenge will be lost. After completing all 54 floors of the Trial (with 45 being fighting rooms and the other 9 being rest stops), the Master Sword awakens its true power, allowing it to stay in its powered-up state at all times.[3]

The Beginning Trials are the first 13 floors of the Trial of the Sword. The first 7 floors are forest themed, with each of them containing Trees, Rocks and grass. The sixth floor is the Trial of the Stone Talus. The seventh floor is a resting stop with a Cooking Pot, a Fairy and three Treasure Chests. Floors 8 through 12 all contain water. The twelfth floor is the Trial of the Hinox. On the thirteenth and final floor of the Beginning Trials, Link finds himself in an Ancient Shrine themed room known as the Sword Monk's Shrine, and a mysterious voice tells him that he is now strong enough to wield more of the Master Sword's power.[4] At the end of a long staircase rests the Master Sword in a pedestal, where Link pulls it and is transported back to the Korok Forest.

The Middle Trials are the middle 17 floors of the Trial of the Sword. The first 4 floors are shrine-themed and feature a constant upward draft over a bottomless pit and scattered platforms. The fifth floor is a resting stop with a Cooking Pot, a Fairy and three Treasure Chests, one of which contains Hylian Trousers. Floors 6 through 10 are in a dark forest setting, not unlike those of Thyphlo Ruins. The tenth floor is the Trial of the Hinox. Floor 11 is another resting stop with a Cooking Pot, two fairies, and three Treasure Chests, one of which contains a Hylian Tunic. Floors 12 through 16 are again shrine-themed, but exclusively feature Guardian Scouts. On the seventeenth floor, Link returns to the Sword Monk's Shrine, where the Master Sword rests on a different pedestal that is now connected to the previous pedestal by an added walkway.

The Final Trials are the final 24 floors of the Trial of the Sword. The first 5 floors are set in a jungle during a thunderstorm and feature Stal enemies. The fifth floor is the Trial of the Stalnox. The sixth floor is a resting floor with a Cooking Pot, a Fairy and three Treasure Chests, one of which contains Flamebreaker Boots. Floors 6 through 11 are volcano-themed, complete with burning temperatures. The eleventh floor is the Trial of the Igneo Talus. The twelfth floor is another resting floor, with a Cooking Pot, two Fairies, and three Treasure Chests, one of which containing a Royal Guard's Shield, a Stone Smasher, and a Hylian Tunic. Floors 13 through 17 are ice-themed, with appropriate temperatures. The sixteenth floor is the Trial of the Frost Talus. The eighteenth floor is another resting spot with a Cooking Pot, three Fairies and three Treasure Chests. Inside the Treasure Chests, Link can find a Royal Broadsword, a Royal Shield, and a Royal Bow. Floors 19 through 23 are set in ruins and feature various Guardians. On the twenty-fourth floor, Link returns to the Sword Monk's Shrine. This time, the pathways lead a final pedestal with the Master Sword, surrounded by the seven unnamed Monks who prepared the Trial of the Sword and now deem Link worthy of the fully awakened Master Sword. They then disappear, having fulfilled their duty, leaving Link to pull out the now fully awakened Master Sword.[5]

Unlike the other floors, three of the floors contain Animals that do not need to be defeated before progressing to the next floor. Specifically, there are Stalhorses on the fourth floor and regular Horses on the twentieth, twenty-second, and twenty-third floors.