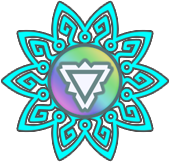 Moon Gate
Trial Gates are portals that allow access to the Silent Realms in each of the three regions in The Surface in Skyward Sword.[1] The location of the gates are usually given off by the faint bloom and the Blessed Butterflies that float over the gate.

After Link visits the Isle of Songs for the first time and learns "Farore's Courage", Fi will activate the Dowsing ability to search for the first Trial Gate to the Farore Silent Realm.[2] Once Link locates the gate, he must take out the Goddess's Harp and play at the tempo indicated by the pulsating circles of light given off by the gate mark. If the young hero is playing at the right tempo, Fi will join Link by providing the vocals, and petals will begin to grow from the Trial Gate. Once petals completely surround it, the Trial Gate will be fully activated, at which point Link must thrust the Goddess Sword in the center to be transported to the corresponding Silent Realm.[3]

Every time Link returns to the Isle of Songs to learn a new melody, he will be able to Dowse for the next Silent Realm. This is true except for the last trial, in which earning the "Song of the Hero" from the three dragons is necessary to search for it.