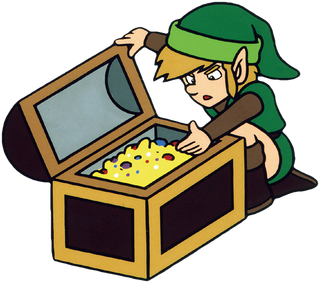 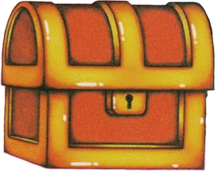 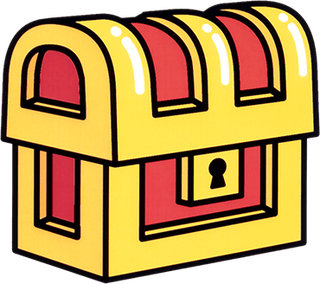 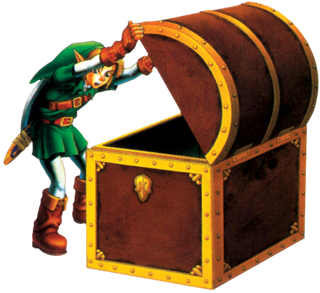 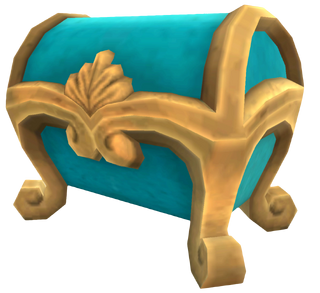 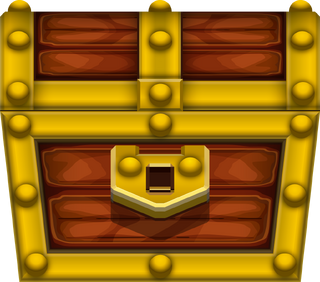 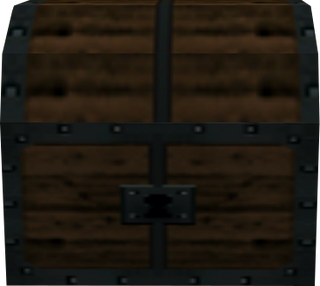 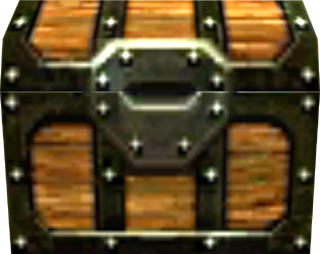 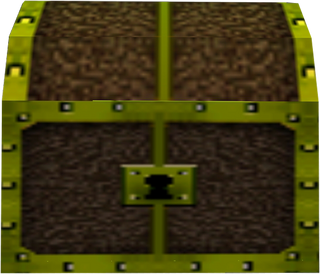 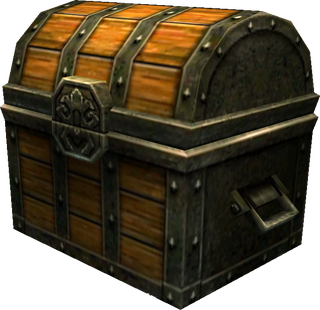 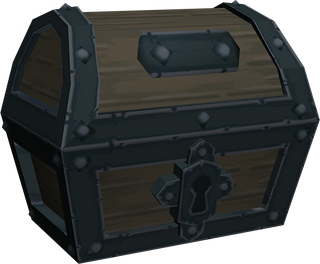 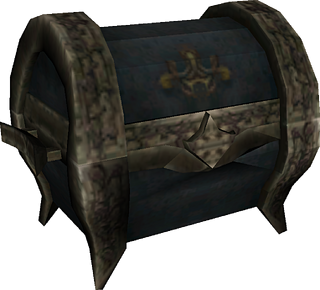 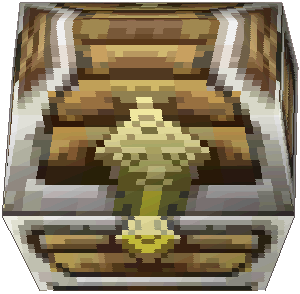 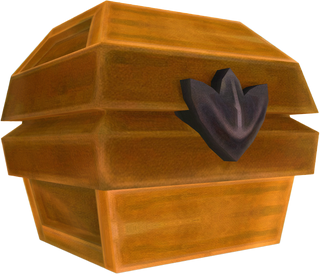 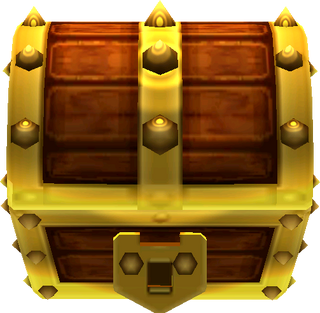 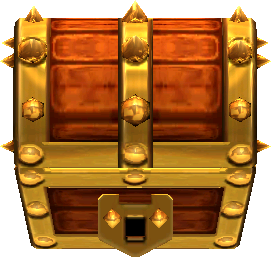 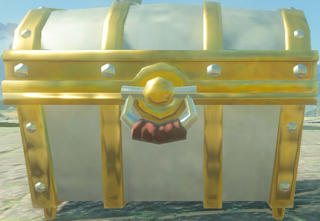 Storing Keys, ammunition, Rupees, Dungeon Maps, Compasses, and other items
Treasure Chests,(LA | MM | OoS | OoA | TWW | SS | BotW)[1][2][3][4][5][6][7][8][name reference needed] also known simply as Chests,(TMC | HW)[9][10] are recurring Objects in The Legend of Zelda series, appearing in every title since A Link to the Past. Found in both the Overworld and in Dungeons, each Treasure Chest (with the exception of Traps) contains an item that will aid Link on his quest. Smaller Chests usually contain common items and collectibles such as Small Keys, Bombs, Arrows, and various amounts of Rupees. Larger Chests contain rarer, more important items, such as equipment, Big Keys, Pieces of Heart, and large sums of Rupees. Some Chests are locked or otherwise guarded; some will only appear after the completion of a Puzzle in the same room.

Although Treasure Chests have nearly identical roles in all their incarnations, their appearance is quite diverse. Generally, Chests are made of wood framed in metal. The color of the wood and metal varies: in A Link to the Past, Chests are of a mahogany-like color with an aurulent frame, whereas Chests in Ocarina of Time are made of a much darker wood framed in a dull, lead-colored metal. Chests in The Minish Cap are painted blue, red, or yellow. Other Chests do not have a metal frame, and are entirely crafted from wood; yet others are made entirely of metal. As they are mostly made of wood, Treasure Chests can be latched onto with the Hookshot. This functionality does not carry over to the Clawshot in Twilight Princess.

The Treasure Chests containing Big Keys are generally more opulent than regular Chests. In Ocarina of Time, Majora's Mask, and The Wind Waker, these Chests are blue and are decorated with gold patterns or an elegant golden frame. In Twilight Princess, they are adorned with a red jewel. This is a trait that is also present in the Big Chests of Four Swords Adventures, which are adorned with an emerald-like jewel.

Although most Treasure Chests are equipped with a lock, very few actually require a Key to open.

The presence of myriad Treasure Chests throughout the worlds of the Zelda universe is a mostly unexplained phenomenon. According to the A Link to the Past official Nintendo Player's Guide, Treasure Chests, hand-crafted by skilled artisans, were used by the Hyrulean people to safeguard their family heirlooms and other treasures.[11]

Small Chests are the most basic and most common type of Treasure Chest. They contain the widest variety of items, including Small Keys, ammunition, Rupees, and other treasures. In Link's Awakening, Oracle of Ages, and Oracle of Seasons, they also contain more important items such as equipment, the Map and Compass, and Big Keys, as these games lack the bigger Chests the more important items are usually found in. Small Chests are the only type of Chests found in these games. Small Chests in A Link to the Past also contain Big Keys, as this game lacks the Big Key Chests as well.

In Ocarina of Time and Four Swords Adventures, Link must be wary when opening a Small Chest—especially in a room with multiple Chests—as it may be a Trap. Some Small Chests are invisible; they can be revealed by using the Lens of Truth.

In A Link to the Past, a special purple Chest can be found in the abandoned house east of the Village of Outcasts (where Link gets his Sword tempered in the Light World). The Chest must be brought to the Lockpicker at the entrance of the Desert of Mystery, who will then give Link the Bottle found inside when he opens it.

Big Treasure Chests typically contain more valuable treasure. In A Link to the Past and The Minish Cap, they appear uniquely in dungeons and only contain that dungeon's item (such as the Bow, the Boomerang, or the Hookshot). In A Link to the Past, these Chests require the Big Key to unlock. In other games, Big Chests contain a wider variety of items, such as the Map and Compass, Rupees, Charts, and even Pieces of Heart. These Chests are also more numerous in both dungeons and the Overworld.

Like in A Link to the Past, Big Chests in Four Swords Adventures (distinguished by their increased width and emerald jewel) also require a Big Key to unlock. These Chests usually enclose Large Force Gems worth thousands of small ones.

In Ocarina of Time, Majora's Mask, The Wind Waker, Twilight Princess, and Skyward Sword, Link is bathed in light when he opens a Treasure Chest. The opening of the Chest is accompanied by a suspenseful tune as Link reaches for the item in the Chest.

Located uniquely in Dungeons, these Chests contain the Boss Key (or Big Key) of the Dungeon they appear in. Typically, they are found near the end of the Dungeon, and are much more ornate than regular Chests.

Only Ocarina of Time, Majora's Mask, The Wind Waker, and Twilight Princess feature Boss Key Chests. In the absence of these Treasure Chests, Boss Keys are enclosed in Small Chests. As with Big Chests, they are filled with light and their opening is accompanied by a tune.

On the Great Sea and in the World of the Ocean King, Treasure Chests can be salvaged from the ocean floor. By finding Treasure Charts in the former and Treasure Maps in the latter, Link can locate these Chests and attempt to salvage the them using the attachment on his boat (the Grappling Hook in The Wind Waker and the Salvage Arm in Phantom Hourglass). In these strange Chests, Link can find a variety of items, including Rupees, Pieces of Heart, Special Charts, Ship Parts, and the Sand of Hours. In The Wind Waker, these Treasure Chests are essential as eight of them contain the Triforce Shards. These Chests are located with the help of the eight Triforce Charts.

Although the majority of Treasure Chests are in plain reach, some may require additional effort to open. These Chests may be locked (in which case the Big Key is required) or even guarded by a Sub-Boss or enemies acting as Mini-bosses.

Treasure Chests may be guarded in other manners as well. In The Wind Waker, some Chests in the Forbidden Woods are guarded by parasitic eye-plant creatures that cover the Chest in vines. To open the Chest, Link must destroy the eye with Bombs.

Many Chests require puzzle-solving to access. Some will only materialize once a Puzzle has been completed, a Switch has been pressed, all the enemies in the room have been defeated, or all the Torches in the room have been lit. In Spirit Tracks, there are Treasure Chests hidden in the ground that are unearthed by playing the Song of Discovery with the Spirit Flute.

Skull Chests are Treasure Chests found in Monster Strongholds in Breath of the Wild.

They are usually located on top of a lookout tower towards the centre of the camp, guarded by a combination of Bokoblins, Lizalfos, and Moblins. When found initially, their eyes glow purple and they cannot be opened. To do so, Link must defeat all monsters from the camp at which point a cutscene will show the chest's eyes become yellow and the chest will unlock.

Skull Chests can contain Weapons, Gems such as Ambers, or Rupees.

Some Treasure Chests do not contain useful items; they instead contain harmful traps. Link must be wary of these traps, as there is no way to distinguish them from other Chests. Traps first appeared in Link's Awakening, in which certain treasure Chests contain enemies such as Zols. In Ocarina of Time, these traps release an icy breath (like that of a Freezard), that will temporarily freeze Link and sap away his life energy. Treasure Chest Traps return in Four Swords Adventures, where certain Small Chests contain Big Bombs that will instantly kill the Links if they are in range when it explodes. In Phantom Hourglass, some Treasure Chests hold Rupoors.

Treasure Chests are also used by the inhabitants of the Overworld in a recurring mini-game called the Treasure Chest Game. Although the rules of the game vary in its multiple incarnations, the game typically consists of choosing from two or several Treasure Chests. Some will contain prizes such as large amounts of Rupees, while others will contain next to nothing, or nothing at all. If Link chooses the winning Chest, he may be given the option to risk his current winnings for another round with even higher stakes.

In Ocarina of Time, Link can "cheat" by using the Lens of Truth to detect the contents of each Chest. This only applies to the Treasure Chests of the mini-game.

Ciela finds a big Treasure Chest in the Temple of the Ocean King.[12] Link carries the Chest outside of the Temple while fleeing a Phantom. Linebeck opens it to find the Phantom Hourglass.[13] Another Treasure Chest is found by Link and Ciela on the Isle of Ember.[14][15] This Treasure Chest houses the Boomerang.[16]

Treasure Chests are hidden around the Scenarios, either in odd corners of the map or in plain sight. Some are even partially buried, requiring the use of Magnesis to unearth them. They can contain Weapons, 100-300 Rupees, or uncommon to rare Materials for Quest completion.

Treasure Chests appear in Cadence of Hyrule. They can be destroyed to reveal their contents.