"These businessmen are traveling the world in search of curios and oddities, each with the hope of someday opening his own shop."
— Nintendo Gallery

The Traveling Merchants are characters from The Legend of Zelda: The Wind Waker. They are three disguised Gorons that can be found on various islands throughout the Great Sea.

The Traveling Merchants play a major role in the quest for the Shop Guru Statue. They swap various items with Link, which can then be sold at the Windfall Island Shop to create Merchant's Oaths. They all wear large hats which cover their faces, meaning that they can only be identified as Gorons one of two ways: when the Deku Leaf is used to blast off said hats, and by the Goron emblem on their bag. One can be found on Bomb Island (F5), one on Greatfish Isle (B4), and one on the Mother & Child Isles (B2).

The Traveling Merchants all hope to open their own shop one day. 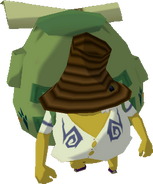 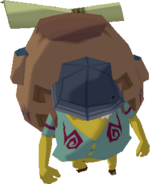 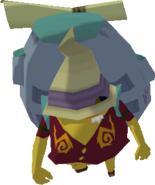 Retrieved from "https://zelda.fandom.com/wiki/Traveling_Merchants?oldid=530841"
Community content is available under CC-BY-SA unless otherwise noted.