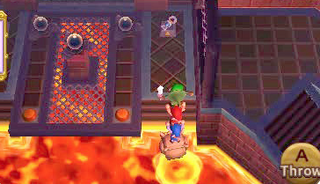 Training Ground is a Level in Tri Force Heroes.[name reference needed] It is the third Level of the Fortress area.

The Training Ground takes place in a chamber filled with numerous traps and obstacles, likely used for training for the Fortress's Soldiers, hence the Level's name. The Level notably features several harmless Totem Armos, which the Links can ride on to reach other sections of the Stages, such as by crossing hazardous lava pits, and fighting enemies. These Armos can be found on green panels, which are used to park the Armos at.

In Stage 1, the Links appear in a room with a pit of lava. In the center of the room is a heavy Switch, which after pressing with all three Links, will make a Totem Armos and its green panel appear. This Armos can be used to cross the pit of lava to the other side, where several more Switches and a Gust Jar and Gripshot can be found. The Armos can be parked on a green panel to the left of this side. However if the Links go right from the starting platform, they will find a Bow up a staircase. To clear the Stage, the Links must make it to the other side of the lava pit. This is possible by having two Links ride the Armos, then pressing the two floor Switches on the other side to make a bridge appear for the third Link. The Links must then hit all three of the blue timed Switches, but must do so from a distance as the Switches will close if they get too close. All three items can activate the Switches. One Switch is elevated, and requires either the Links to form a Totem or to use the Armos to hit it. Once the three Switches are activated, a door opens to four more Switches on the floor, one of which is inside a green panel. One of the Links must park the Armos on top of this switch, while the other Links press the other three. This will open the second door to the Triforce Gateway.

In Stage 2, the Links ride an elevator to a room containing another Totem Armos. Sword Soldiers and Fire Hardhat Beetles appear as the Links enter the room, which can all be easily defeated with the Totem Armos. The Sword Soldiers' shields however will protect them from the Armos, however their shields can be removed with the Gripshot. After all enemies are defeated, the doors to the Triforce Gateway opens.

In Stage 3, the Links enter another chamber filled with pits of lava. To the right side is a narrow walkway the Links are supposed to go, however iron balls roll down the path and prevent the Links from going further. A Totem Armos sits nearby, but a Beamos sitting on top of it will fire beams at any of the Links who approach. The Beamos can be destroyed by firing an Arrow into its eye after forming a Totem, or by stunning it and striking it with the Sword. Using the Armos, the Link riding it can then hop down the pathway, as the Armos will destroy any of the iron balls that roll into its path. The other Links can then follow the Armos as it clears a path for them. A Beamos however will threaten to fire beams at them along the way. On the right side is another Beamos and a green panel for the Armos to park at. Further down is a Chest sitting on a ledge containing Rupees, which can be reached by dropping down and striking the Switch to activate the elevator.

In Stage 4, the Links fight a group of Sword Soldiers and a Spear Soldier in a pit while riding Totem Armos. The enemy Soldiers will attempt to have their Armos jump and crash down onto the Links. The Soldiers can be easily defeated by knocking them off with the Gust Jar, which will cause their Armos to self-destruct. The blue Sword Soldier however is much more durable, but its shield can be stolen with the Gripshot. Once they are defeated, a wall lowers revealing another Sword Soldier, a Ball and Chain Soldier and a Bomb Soldier riding Totem Armos, one of which is riding on two stacked Armos. The Soldier riding the two Armos can be easily defeated by taking a lift to a ledge and then dropping down onto the Soldier. Once the enemies are defeated, a door opens to three green panels and the Triforce Gateway.