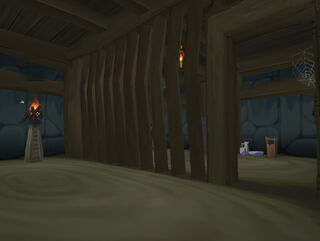 Windfall Island
The Town Jail is a location in The Wind Waker.[name reference needed]

Situated near the middle of Windfall Island, it is here where Tingle is imprisoned after being accused of stealing a Picto Box,[1] though he claims that he is innocent of the crime.[2] Link can press a Switch hidden behind a cluster of Jars to free Tingle, who will thank him by giving him the Tingle Tuner. In The Wind Waker HD, Tingle will instead give the young hero the Tingle Bottle. Moreover, he gifts Link a Map with the location of his island,[3] and tells him that if he ever needs help with reading charts to "just leave it to Tingle."[4]

Once Tingle is freed, Link can enter the cell and push the crate that's against the wall to reveal a small hole through which he can crawl. Inside the hole is a complex maze, riddled with dead-ends guarded by Rats who will send Link out of the jail, into the water where he first met the King of Red Lions. If Link successfully navigates the maze, he will find a hidden room where the Picto Box is kept in a Treasure Chest. There are two stone slabs in this room, one explaining the culprit's story,[5] while the other explains the controls of the Picto Box.[6]