The Tower of Hera, also known as the Mountain Tower, is the third dungeon in The Legend of Zelda: A Link to the Past. It is one of the three dungeons that house the Pendants of Virtue. Its pendant is the Pendant of Wisdom. It is the Light World equivalent of Ganon's Tower. The tower is located on the summit of Death Mountain, just north of Spectacle Rock. The only way to reach the tower is to travel to the Dark World and back using the Magic Mirror to bypass the rock blocking the route.

Link is trying to get the three Pendants of Virtue in order to obtain the Master Sword. The Tower of Hera is, according to Sahasrahla, the home of the third and final pendant. 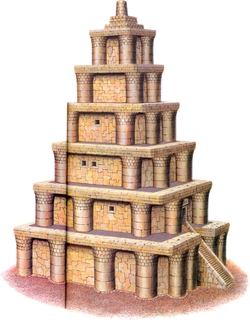 The tower introduces Crystal Switches, which raise and lower color-coded blocks. Link solves several puzzles involving these while making his way up the tower. He also encounters six-pointed Star Switches, which change the layout of the holes in the floor. By correctly utilizing these Star Switches, Link finds the main treasure of the dungeon, the Moon Pearl. The Moon Pearl is a red, transparent orb of unknown origin that allows its holder to keep their true form in the Dark World. Having collected the Moon Pearl, Link must continue to the highest room in the tower, where the boss, Moldorm, and the Pendant of Wisdom can be found. Although the Red Shield isn't necessary to complete the dungeon, it is very helpful due to the Kodondos lurking within.

The Tower of Hera, and by extension Death Mountain's light world equivalent in the Japanese version of A Link to the Past, may have been named for Hera, one of the Olympian gods of Greek mythology, and both wife and sister of Zeus, the king of the gods. The Olympian gods were said to live on top of Mount Olympus, and since the Tower of Hera is near the very top of Death Mountain, this seems to be a likely possibility.

Retrieved from "https://zelda.fandom.com/wiki/Tower_of_Hera_(A_Link_to_the_Past)?oldid=495376"
Community content is available under CC-BY-SA unless otherwise noted.