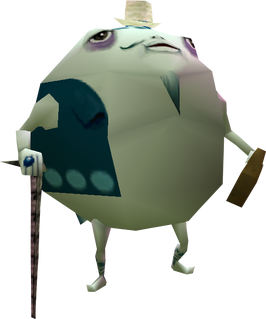 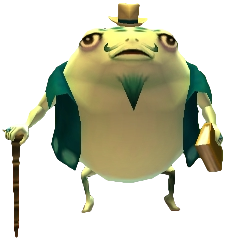 Toto is a character in Majora's Mask.[1]

Toto is a short, stout Zora and the manager of the famous Zora band: The Indigo-Go's.[2] He is one of the few band members who knows about Lulu's condition. Although the band had planned to perform on the day of the Carnival of Time, Toto is forced to cancel the show due to Lulu losing her voice.[3]

Toto spends the entire span of Majora's Mask in Clock Town: during the day, he can be found in the Mayor Dotour's office with Madame Aroma and Gorman. In the evening, he heads over to the Milk Bar. If Link visits him there, he will ask for his assistance in making a sound check.[4] If Link helps him, Toto will teach him the famous song of The Indigo-Go's: "Ballad of the Wind Fish."[5] Learning the song will complete two entries in the Bombers' Notebook and leave Link with one more mask, the Troupe Leader's Mask, which is given to Link by Gorman after hearing the melody.

In the Majora's Mask manga by Akira Himekawa, Link mistakes Toto for King Zora of Hyrule, only to realize that he is too small to be the King.

In Japan, Toto is a children's term for a fish.