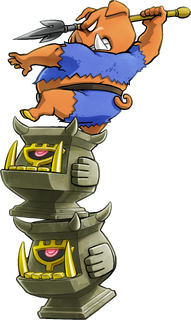 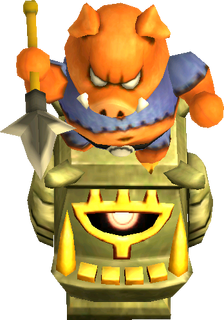 Moblin Base
Training Ground
Sky Temple
Den of Trials
Totem Armos are enemies and vehicles in Tri Force Heroes.[1] They are a variation of the Armos which other enemies, as well as the Links, can ride on in the form of a Totem.

Totem Armos are so-named because they are frequently encountered with other enemies riding on top of them, such as Moblins and Soldiers, forming a Totem. Totem Armos will pursue the Links by hopping after them, while the monster above uses their weapons to attack. The combined efforts of both monsters can make them a difficult enemy to deal with, as the Armos's invincibility to most attacks protects its rider who controls it. The Soldiers who ride Totem Armos can also make their Armos jump high into the air and crash down as a devastating attack. Occasionally, a stack of three monsters may be encountered, consisting of two Totem Armos stacked on top of each other while a third monster sits at the very top.

The Totem Armos and their riders can be defeated in two ways. One way involves the Links forming their own Totem, allowing them to reach the rider's height and strike back. A monster stack of three will require a Totem of three Links. When the Armos's rider is knocked off or defeated, the Armos will lose control as it begins to spin madly towards the Links before self-destructing. Another option is to toss a Bomb near the pursuing Armos, as the blast's radius will defeat the rider. For taller stacks of Armos, this may require timing the Bomb's throw so that it explodes in midair.

In the Training Ground and Sky Temple, the Links can also ride harmless Totem Armos that initially appear sitting quietly on green panels. One Link simply has to be thrown on top of one, which will automatically begin moving. Totem Armos will constantly move, and the only control the mounted Link has over it is to steer it to another direction or speed up its movement. However, if a Doppel is riding a Totem Armos and is then switched to another Link, the Totem Armos will hop in place until control is returned to the Doppel. The Link riding the Armos can only get off once he parks the Armos at a green panel. If the Link riding it is knocked off or if Totem Armos is destroyed, it will respawn at the last green panel it was parked at.

Totem Armos can be used to safely cross fire and lava, as well as solve certain puzzles and fight enemies with. The Totem Armos's invincibility to most enemies and obstacles allows the Link riding it to clear a safe path for the other Links to follow.

A "dark" variant of Totem Armos appears in the Den of Trials, where it is ridden exclusively by dark variants of the enemies faced there.

A Miniblin riding an Armos

The name "Totem Armos" refers to their usage as mounts by other enemies.