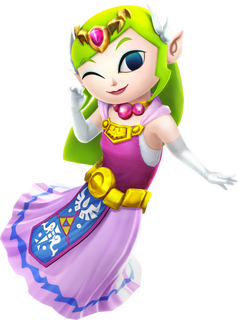 Toon Zelda[1] is a playable Warrior in Hyrule Warriors, appearing in the Phantom Hourglass & Spirit Tracks DLC pack. Her design is based on Zelda's appearance in Spirit Tracks, with an added airbrush shading as opposed to her normal cel shading.

Toon Zelda is a ghostly spirit who attacks using a Phantom vessel. Apart from her Sword attacks, Toon Zelda can curl into an iron ball like a Wrecker Phantom and warp over enemies like a Warp Phantom. She can also come out of the Phantom's body and use light energy attacks. Toon Zelda is cowardly afraid of Rats, which she uses to perform attacks as well.

Toon Zelda does not drop any unique Materials when defeated in battle. She instead drops Tetra's Sandals as a Silver Material and Tetra's Bandana as a Gold Material.