Zelda Wiki
Register
Don't have an account?
Sign In
Advertisement
in: Enemies, Enemies in The Legend of Zelda TV Series

Not to be confused with Armos. 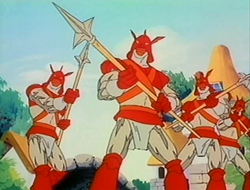 Crissword
Tinsuits are armored foes that appear as common enemies for Link in The Legend of Zelda TV series.

In "The White Knight", while Link and Princess Zelda are in an unnamed village, Tinsuits rise from the Underworld and begin to attack the young hero and the princess.[1] Link easily zaps several Tinsuits, with one of them dropping a crossbow and Rupees. With Link distracted by the loot, a Tinsuit throws its spear at Link and knocks away his sword, then grabs him from behind as more Tinsuits start to come out from the ground. Link kicks the crossbow to Zelda, who zaps away the Tinsuit that was holding Link and gives him a chance to escape. However, a Tinsuit that was on the ground trips Link and grabs him by the ankle, and shortly after, the Tinsuit blows a horn to summon an Octorok. With Zelda's crossbow now out of ammo, the Octorok throws Link off to a nearby barn, but the young hero gets back up now holding a piece of wood. The Octorok then fires a beam of light that Link bats back so that it finally defeats the last Tinsuit.

In "The Moblins are Revolting", Tinsuits are part of the Brotherhood of Underworld Monsters and are one of the many foes who try to get revenge on Link and Zelda. A particular scene shows several Tinsuits that begin to climb a ladder to get inside North Castle, but the ladder eventually breaks due to their weight.