Zelda Wiki
Register
Don't have an account?
Sign In
Advertisement
in: Items, Items in The Wind Waker HD 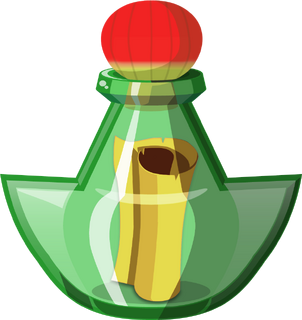 Sends messages to other players via Miiverse
The Tingle Bottle is an item exclusive to The Wind Waker HD.

The Tingle Bottle replaces the Tingle Tuner from the original The Wind Waker.[1] It is a green bottle shaped like Tingle's head, with the cork resembling the Tingle Balloon. Like the Tingle Tuner, it is given to Link by Tingle for releasing him from the Windfall Island jail.

The Bottle could be used to send messages to other players of The Wind Waker HD. Messages and screenshots were inserted into the bottle and it was thrown until it disappeared. A random player would then receive the message in a bottle via Miiverse.[2]

As of November 7, 2017, with the discontinuation of all Miiverse features, the Tingle Bottle is no longer useable, making it completely useless as an item.