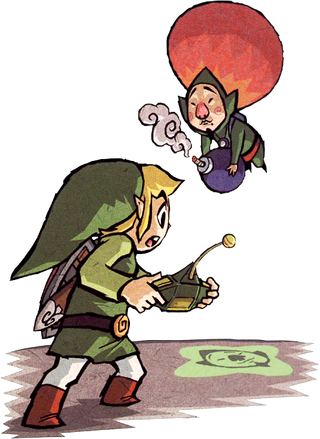 Link can use a Tingle Bomb on the Jar on the ledge to the west below the Savage Labyrinth's entrance to cause a larger Jar to appear. The larger Jar contains an Orange Rupee, valued at 100 Rupees. From that point on, both Jars will remain and reappear whenever Link revisits them.

In Freshly-Picked Tingle's Rosy Rupeeland, Tingle Bombs can be concocted by using two Bomb Fruits, two Gelatine and two Explosive Claws. They are stored in Empty Jars. There are cauldrons of the concoction in Desma's Labyrinth.