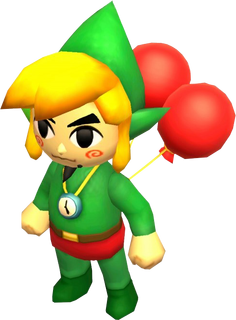 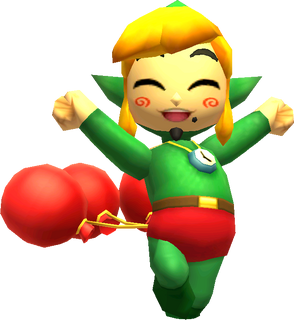 Tingle's Hood
Tingle's Shirt
Tingle's Tights,(BotW)[1] also known as the Tingle Tights,(TFH)[2] is a recurring Item in The Legend of Zelda series.

The Tingle Tights are an Outfit in Tri Force Heroes that can be crafted at Madame Couture's after Link has completed the Forest Temple. The Outfit dresses Link in Tingle's signature bodysuit, complete with his clock pendant, rosy cheeks, and facial hair and mole.

Wearers of the Tingle Tights begin each Level with three balloons tied to their waists. These balloons save the wearer from losing Health or failing the "Don't fall at all!" Drablands Challenge when falling off ledges. This ability works up to three times per Level, as one balloon will pop after each fall.[3] The ability also works for falling into Lava, but not for falling into Quicksand.

Tingle's Tights are only available when The Master Trials DLC Pack is active. After beginning the "EX Treasure: Fairy Clothes" Side Quest, Tingle's Tights can be found in the Mabe Village Ruins. They're part of Tingle's Set, along with Tingle's Shirt and Tingle's Hood. Wearing the full set will give Link the Night Speed Up Set Bonus.