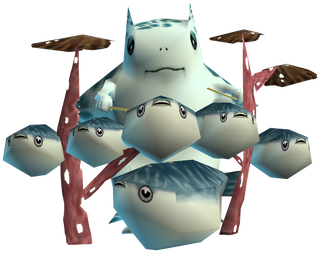 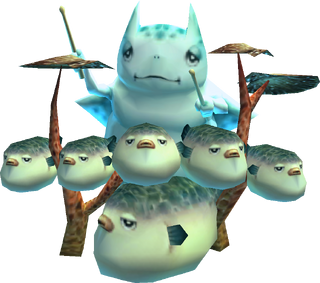 Tijo is a character in Majora's Mask.[1]

Tijo is the drummer of the Zora band The Indigo-Go's and is Mikau's roommate.[2] He has broken the ladder that leads to Mikau's upper-half of the room and promises to start going on a diet.[3] He goes on to tell Zora Link that he knows the reason the ocean has been getting weird is due to problems at the Great Bay Temple. Whenever this happens, the Zora descendant who is been protecting the temple will have trouble befall them, implying that Lulu has been having problems because she is the supposed descendant.[4]

Tijo plays the cave theme from A Link to the Past on his drum kit upon entering his room. Tijo leaves his room to practice during the rehearsal and is last seen during the ending credits where he and the rest of the band members are playing at the Milk Bar for the Carnival of Time.