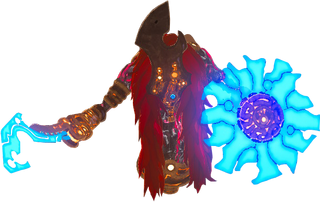 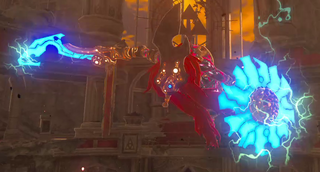 Thunderblight Ganon is a recurring Boss in The Legend of Zelda series.[3]

Thunderblight Ganon is one of the four Blight Ganons, phantoms of Calamity Ganon that took control of the Divine Beasts.[4] It is found either inside the Divine Beast Vah Naboris or in the center of Hyrule Castle if it is not already defeated. It is responsible for bringing Urbosa to her demise.[5]

Thunderblight Ganon, along with his brethren, appears in Age of Calamity. He appears in Lightning and Wind, along with Windblight Ganon. Like his betherin, he looks different, probably due to being in his prime. He has electrical orbs behind him, and his weaponry is lime green, the same color the electric element is portrayed as. He duals with Urbosa for control over Vah Naboris and managed to gain an advantage over her and goes in for the kill while she was vulnerable, but a time portal from Terrako opens, bringing forth Riju and Patrica where they ram into Thunderblight before he could reach the Gerudo Champion and is defeated by Link and his friends upon arrival. He also appears in Each Step Like Thunder, where he disrupts electrical equipment Purah was using. You eventually fight him, where he's defeated again.