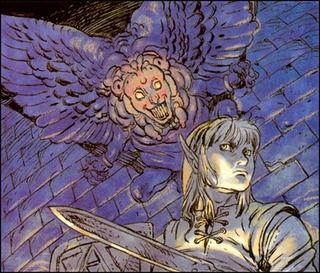 Thunderbird is a Boss in The Adventure of Link.[1] It is an artificial life form created by the King of Hyrule to protect the Triforce of Courage in the Great Palace.[1]

When Link enters the chamber of Thunderbird, it will not be anywhere to be seen at first. However, after a few moments, it will swoop down upon Link from above and proceed to attack him with fireballs. It will have a red color to it and will be invulnerable to attacks, leaving it invincible at first. To reveal its weakness, which is its face, Link must cast the Thunder Magic. Casting it will cause Thunderbird's color to change to blue, making its face appear, leaving it vulnerable to Sword attacks. When reaching half its health, Thunderbird will quicken its pace of throwing fireballs, which can only be repelled with the Reflect Magic.

Once Thunderbird has taken enough damage to its face, it will disintegrate, leaving behind the Key to the Palace's final chamber, where Link will face his Shadow.

Thunderbird also makes an appearance in the Coming Home story of The Legend of Zelda comics by Valiant Comics. Unlike the game, Thunderbird is much smaller and somewhat resembles a Moby. It seems to be a servant to Shadow Link, who it calls "Master."[2] In the story, Thunderbird accompanies Shadow Link in defeating Queen Seline and taking over Calatia.[3] Although Thunderbird does not play a major role in the story, it does advise its master about not letting the Calatians witness the fight between Shadow Link and his good counterpart,[2] but later it is the one that signals the start of the fight between the two.[4] After Shadow Link is defeated, it is unknown what becomes of Thunderbird.

Thunderbird's name could be a reference to the mythological creature of the same name.