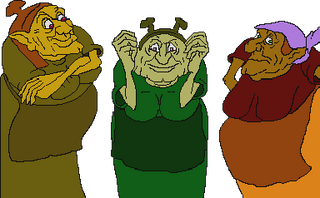 The Three Witches are the third bosses in The Wand of Gamelon.[citation needed] They are located at the Fairy Pool.

The Three Witches are minions of Ganon. They are responsible for freezing the Fairy Pool and trapping the Fairies that live there.[1] They are obsessed with spreading evil and use their combined powers to cover the forest in darkness.[2] Zelda defeats them and they are blown away by a powerful gust of wind, thus freeing the fountain's Fairies.

The Witches' combined powers makes the entire Pool pitch dark, requiring the use of a Lantern to see. Each of the Witches are scattered about the Pool. One is on ground level close to the entrance, another is at the fountain's Pool, while the third is on a branch above the Pool. They are all capable of throwing fireballs at Zelda that will kill her if it collides. The Witches are all weak to the Sword, which will defeat one in a single strike.