Zelda Wiki
Register
Don't have an account?
Sign In
Advertisement
in: Locations in The Adventure of Link, Locations 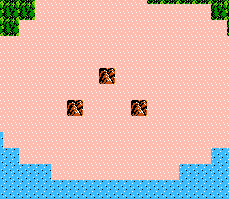 Three-Eye Rock is a landmark in the southern part of Eastern Hyrule in The Adventure of Link.[citation needed] The three rocks form a triangle with each other and a rhombus with the Three-Eye Rock Palace.

The landmark is most famous for its role in unlocking the Three-Eye Rock Palace. To reveal the palace, Link must play the Flute at the point where the line between the two southern rocks meets the perpendicular line from the northern rock.[1] The palace appears a short distance south of its namesake.