Zelda Wiki
Register
Don't have an account?
Sign In
Advertisement
in: Lorule, Towns, Locations, Locations in A Link Between Worlds
English

This article is about the location. For other uses, see Thieves' Town (Disambiguation). 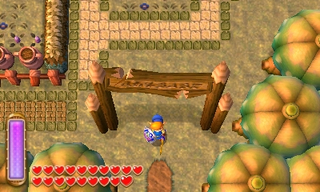 Thieves' Town is a location in A Link Between Worlds.[1] Located on the western edge of Lorule, it is the counterpart to Hyrule's Kakariko Village. It is very similar in appearance to the Village of Outcasts from the Dark World.

The settlement is home to a group of thieves who have a hideout on the northern edge of the town. The leader of the thieves, Stalblind, possesses the portrait of the Sage Osfala. The Thief Girl was also imprisoned in the Thieves' Hideout,[2] and will help Link in return for being freed.

It is also home to a few masked villagers, and their leader the Masked Elder. Most of the masked followers found in town gather in a field located to the west, and speak of becoming monsters to be saved.[3]

The state of the Lorulean people in town is less then desirable to some,[4] though some can still be found trying to make the best of things.[5]

Numerous Moblins patrol the town, and many Hyus are seen floating around.