Given the Gerudo markings on the Trident, name, and a history of Polearm-based weapons being used among the Gerudo (e.g. the glaive-like weapons wielded by sentries in Ocarina of Time and Majora's Mask), it possible that the Thief's Trident is of Gerudo design and may have been used by Ganondorf during his time as the Gerudo King of Thieves.

Promotional Render of the Thief's Trident from Hyrule Warriors Legends 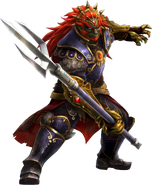 Retrieved from "https://zelda.fandom.com/wiki/Thief%27s_Trident?oldid=486816"
Community content is available under CC-BY-SA unless otherwise noted.