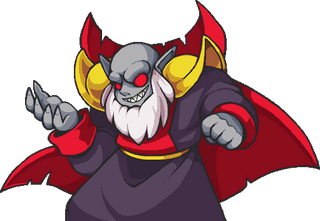 The NecroDancer is a Boss in Cadence of Hyrule.[1] He appears exclusively in Octavo's Ode.

The NecroDancer is the future version of Octavo who defeated Ganondorf before he could ascend to power.[2] He resides in the Future World where he prepares to rule over Kingdom of Hyrule. After traveling to the Future World with the intention of fighting Ganon only to find the tarnished world his future self created, Octavo resolves to stop his evil plans.[3]

Cadence admits that Octavo reminds her of The NecroDancer,[4] who he later became. However, The NecroDancer is not the same NecroDancer from Crypt of the NecroDancer, who was a simple bard known as Octavian prior to amassing an army of monsters and obtaining the Golden Lute in Cadence's world.