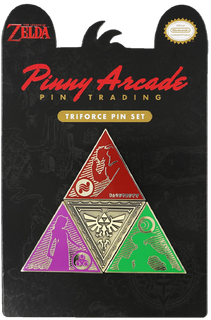 Penny Arcade
The Legend of Zelda Triforce Pin Set is a set of pins manufactured by Penny Arcade.

The Legend of Zelda Triforce Pin Set is a set of four decorative pins based on general artwork of the Triforce from The Legend of Zelda series. It is part of the Penny Arcade series of products released by Penny Arcade. Three of the pins feature silhouettes of Link, Princess Zelda, and Ganondorf alongside Hylian text of their names and the corresponding crests of Farore, Nayru, or Din. Both Link and Ganondorf's pins are painted their associated colors of green and red, respectively. However, Princess Zelda's pin is painted fuchsia instead of the blue often associated with the Triforce of Wisdom. The uncolored center pin depicts the Hyrule Crest. The packaging for the Pin Set also features artwork of a map of the Hyrule.