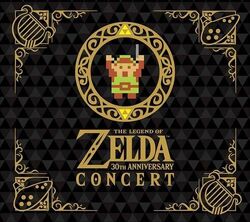 The Legend of Zelda 30th Anniversary Concert is a live performance album recorded during the 30th Anniversary Concert on October 16, 2016 at the Tokyo Metropolitan Art Theater in Tokyo, Japan. It is exclusive to Japan. The album includes 2 CDs, while the limited edition also includes a luxury box, a badge set, a CD stand, and a DVD with the videos projected behind the orchestra.