The Legend of Zelda 25th Anniversary 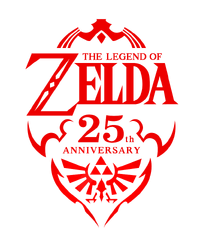 February 21, 2011 marked the 25th anniversary of the The Legend of Zelda series, commemorating the Japanese release of the original The Legend of Zelda. This was celebrated with a series of game releases as well as special events throughout the course of 2011, most of which were announced during the E3 2011 Nintendo conference. The logo for the Zelda 25th birthday was revealed during the 2011 Game Developers Conference, where Nintendo announced that they had special plans prepared for the anniversary, mentioning that it would be handled differently than the Mario anniversary.[1]

The Nintendo E3 2011 conference opened with a special tribute to the franchise, consisting of a highlight reel of previous Zelda games, starting with the original The Legend of Zelda, all accompanied by a live orchestra and choir. The clip also showed a new Skyward Sword trailer. Shigeru Miyamoto then asked the orchestra to play some of the classic songs from the series, such as the Fairy Fountain medley, the jingle when a puzzle is solved, as well as the music played when a Treasure Chest is opened.

The official The Legend of Zelda 25 Anniversary Website was also launched.[3] The site includes: a brief history of all the Zelda games, details about the Make Your Own Zelda Flipnote contest (including a sample animated video made by Nintendo), wallpaper downloads of various Zelda games illustrations, details on The Legend of Zelda 25th Anniversary Symphony, a video of the Zelda Symphony performing at E3 2011, and links to the Ocarina of Time 3D and Link's Awakening DX websites.

At the 2011 GamesCom convention in Cologne, Germany, Nintendo organized the The Legend of Zelda 25th Anniversary flashmob cosplay gathering, inviting fans of the series to show up as their favorite Zelda characters.[4][5] The first 111 cosplayers were awarded a goodie bag, including a limited edition t-shirt and a can of Deku Nuts.

Nintendo also host The Legend of Zelda Quiz, where three players tested their knowledge of The Legend of Zelda series for a chance to win one of three exclusive prizes: the Twilight Princess golden Link and Epona figurine, or a Zelda 25th anniversary Treasure Chest replica filled with extra merchandise.

A portion of the Zelda Room

In honor of the 25th anniversary of The Legend of Zelda, Nintendo of America created a Zelda-themed room at their headquarters in Redwood City, CA. The room, designed by I-am-8-bit, contains several Zelda-related aspects, such as a Treasure Chest on the floor containing Masks, bottled Fairies on top of desks, and Rupees placed on couches. The walls are painted with different themes, such as Hyrule Field with Hyrule Castle in the background, as well as the Master Sword resting in the forest with the Moon looming over.[6]

To celebrate the Legend of Zelda's 25th anniversary, Nintendo released several series of videos, all of which showcase a certain aspect of the games that have made the series unique. Some of them include "25 Years of Wisdom", "25 Years of Power", "25 Years of Romance?", and "25 Years of Music."

Skyward Sword, the only main series Zelda game created specifically for the Wii, was released on November 2011 worldwide.[7] The game itself includes a reference to the series' 25th anniversary, which is when Owlan mentions during the Wing Ceremony opening that this year's ceremony is special since it is also the 25th anniversary of the Knight Academy.[8]

Upon its North American release, a special edition Skyward Sword bundle was available at the price of $69.99. The bundle included a copy of Skyward Sword, as well as a gold Wii Remote Plus. Additionally, a limited edition CD, featuring music from The Legend of Zelda 25th Anniversary Symphony Concert, was also packaged alongside all early purchases of the standard and special edition copies of Skyward Sword.[9]

On November 15, 2011, Nintendo announced that they had commissioned Penny Arcade to release a five-page comic loosely based on Skyward Sword.[10] According to the artist Gabe, Nintendo did not want Link to have an internal monologue, so the comic is told from Gaepora's perspective on how it must feel to have his daughter Zelda kidnapped while solely depending on Link to save her.[11]

Beside Skyward Sword Nintendo also announced each of their current generation consoles would see a release of a Zelda game.

It was announced at Nintendo's E3 Press Conference by Shigeru Miyamoto that Link's Awakening DX would become available that day, June 7, 2011, for the Nintendo 3DS eShop. The price for the game is $5.99 in the United States, $9AU in Australia, and £5.40 in the United Kingdom.[12]

As part of the Zelda 25th anniversary, Nintendo announced during their E3 2011 conference that anyone who registered their copy of Ocarina of Time 3D in Club Nintendo would be receiving the official soundtrack of the game for free. However, the giveaway was only available for residents of the United States and Canada, and the offer started on June 19, 2011, which is when the game was released in North America.

A special edition of Four Swords was made available as a free download for both the Nintendo DSi and Nintendo 3DS between September 28, 2011 and February 20, 2012.[16]

The Zelda HD Experience is a short cinematic unveiled during Nintendo's E3 2011 conference. Although the demo lead fans to speculate that Nintendo was developing a Zelda title for the Wii U,[17] it was later revealed to have been designed to help demonstrate the console's graphical capabilities and control scheme.[18]

The Nintendo 3DS Super Mario title pays homage to The Legend of Zelda series by including a top-perspective level that is in the style of the dungeons found in the original The Legend of Zelda game, full of enemies that Link usually encounters. In that same level, when Mario lights up all of the torches in a room, the tune that plays whenever Link solves a puzzle or uncovers a secret can be heard. Additionally, the level is 5-2 (the number 25 backwards).

As part of a bundle for the 2011 Holidays, a special, limited-edition Cosmo Black Nintendo 3DS marked with the Royal Crest comes bundled with Ocarina of Time 3D. The Nintendo 3DS includes other special markings, such as the Goddess's Harp and the Ocarina of Time in each of its corners. The bundle is sold at the price of $199.99 in the United States.[19]

In early December 2011, Nintendo of Japan released the Zelda Trump playing cards‎, a set of playing cards featuring art from four of the games from the series.

For its Club Nintendo program, Nintendo of America and Nintendo of Australia offered its members a set of three exclusive, high-quality embossed/foiled Zelda 25th Anniversary posters.

In late 2011, Nintendo offered three special Zelda-themed Nintendo points cards, which could be used to purchase online content for the Wii, Nintendo 3DS or Nintendo DSi. Only in Japan, the points cards were actual plastic cards, while the other regions just printed the code on a cardboard card.

On December 21, 2011, Nintendo of Japan released the Zelda encyclopedia Hyrule Historia, a 274-page book containing never-before-seen concept artworks of the game as well as the entire history of Hyrule.