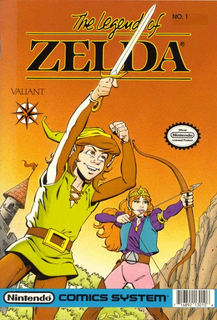 February 1990
The Legend of Zelda is a comic book series published by Valiant Comics, which is the parent company that owned the Nintendo Comics System in 1990 and 1991. In those years, they published a number of Nintendo franchise comics, including The Legend of Zelda , Super Mario Bros., and Captain N: The Game Master. The Valiant Publishing line was founded in 1990 by former Marvel Comics editor-in-chief Jim Shooter. After 1991, Valiant ceased to publish Nintendo-related comics, except for trade paperback collections of some of the series later on.

The Legend of Zelda issues ran February 1990 through August of that same year, and was penned by George Caragonne.[1] The comics were sold at a newsstand price of $1.95 per issue. Each issue contained two 10-page stories, along with two bonus shorts, which were often times very humorous.

The comics take place after the events of the original The Legend of Zelda and The Adventure of Link. Link lives in North Palace along with Princess Zelda and King Harkinian, where he protects the Triforce of Wisdom from Ganon. The comics are reminiscent of The Legend of Zelda TV series in that it mirrors many of the plot elements; however, it takes on a more serious tone than the cartoons, as seen in the plots of The Power and The Price, where Link is corrupted by the Triforce of Power. Furthermore, not all of the issues focus on Ganon stealing the Triforce of Wisdom, as it varies from Link helping Queen Seline recover her powers from Ganon's minions and to Bagu confronting the young hero to save his two pet frogs.

Zelda, like the cartoons, takes a more protagonist role and fights along Link, sometimes even saving him, by wielding weapons such as her Bow.[2] Link is seen once again trying to steal a kiss from the princess any time he saves her,[3] but they always seem to get interrupted by Ganon's minions or Zelda changing her mind.[4] Unlike the animated series, however, the comic makes it clear that Link and Zelda love each other, as they both seem to plainly state it several times throughout their adventures.[5][6]

A new kingdom is also introduced in the comic, known as Calatia, which is ruled by Queen Seline. The land of Calatia is Link's homeland, and it is where his parents, Arn and Medilia, live.

According to Valiant Firsts, there was an issue and a number of stories in production that were eventually scrapped for unknown reasons.[7]

Not much is known about the contents of this issue, but based on its cover, it would have been the seventh issue and have featured a story called Small Problem.

There is some debate over how many Zelda issues were actually released, as there appears to be an issue #7, while issue #6 was never cataloged. The matter became further convoluted when the comics were re-released in 1991 in book formats, where the issues were placed in different orders,[8] and the matter was even further complicated by the discovery of a cancelled seventh issue. The reason for there not being a documented sixth issue is that there were only five Zelda issues in all. The seventh issue was actually part seven of the Nintendo Comics System line, which had nine issues in all.