The Legend of Zelda (Ran) 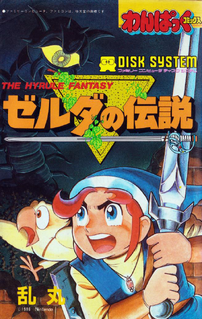 The manga begins as Princess Zelda is abducted and taken to Ganon's stronghold. Ganon, who speaks to her through a monolithic statue in his likeness, demands that Zelda surrenders the Triforce of Wisdom to him. Zelda refuses and Ganon threatens he will continue to terrorize Hyrule until Zelda gives in to his demands. Zelda is then imprisoned as Ganon sends his henchmen to locate Impa, who has left to find the chosen one who will drive away the evil. Elsewhere, Impa is being chased by a group of Moblins and other monsters and is fatally wounded. Link then appears to her aid, alongside his parrot companion Watto. He defeats and drives the monsters off with his Slingshot, blinding their were-boar leader in the process by shooting a splattering seed. In her dying breath, Impa entrusts Link with a magic pendant and instructs that he find an Old Man living in a cave. As Link holds the pendant it gives off a brilliant light, signifying that he is the chosen one Impa hoped to find. Happy to have fulfilled her task, Impa again tells Link to find the Old Man and save Zelda before passing away. Zelda meanwhile grieves over the loss of Impa as she senses her passing. Shortly after, the blinded boar approaches Ganon and tells him of their defeat, only to be executed for his failure. Ganon furiously demands his henchmen to find Link and kill him.

As Link and Watto travel Hyrule in search of the Old Man, they discover that the kingdom's plants and animals are dying. When Link asks some villagers, a man explains to him that the Triforce is responsible for maintaining the balance of life and that something must have happened to it. Suddenly the man's granddaughter then appears being chased by a group of Moblins. A man named Hekuraresu arrives and effortlessly defeats the Moblins. He tells Link to call on him should he ever be in danger. Link continues his quest afterward and eventually finds the Old Man in a cave. The Old Man explains to Link that Ganon had stolen the Triforce of Power, and that Zelda broke the Triforce of Wisdom into eight parts and hid them in an effort to prevent Ganon from taking it as well. With Zelda now kidnapped and the kingdom at stake, the Old Man tells Link that it is up to him to find the eight pieces and rescue Zelda. He then takes Link's pendant and uses to communicate with Zelda from afar, who begs that Link accept his quest. The Old Man finally presents Link the Sword and Shield he was tasked with entrusting to the chosen hero. Link asks where Ganon is and the Old Man tells him that he is in a castle on Death Mountain, but none have been able to reach him. Link excitedly accepts his quest and is about to thank the Old Man, but finds that he has mysteriously vanished.

While embarking on their quest, Link and Watto are ambushed by a group of Octoroks which Link defeats with his new Sword. Unknown to them, a Vire spying on them flies off to inform Ganon. As Link and Watto continue on their quest, they eventually find an island in a lake which Link's pendant reacts to. There they find an opening in a tree that leads to a Dungeon. Guided by the pendant's light, Link explores the Dungeon's passages but is found and challenged by a group of Stalfos. Hekuraresu appears but then falls over dead after being struck with multiple weapons. Outnumbered by the monsters, Link has no choice but to retreat. He then discovers another Old Man, who tells him that the Dungeon houses a treasure that is being guarded by a monster. The pair decide to work together to find the treasure and eventually find the Dungeon's Map which guides Link to the Bow and Boomerang. Eventually, Link is led to Aquamentus, who is guarding the first piece of the Triforce. Link defeats the dragon and as he approaches the Triforce, the image of Princess Zelda appears before him. He asks her how to get to Death Mountain, but Zelda can only give her encouragement before disappearing. As Link leaves the dungeon with the Triforce piece in hand, the remaining monsters inside are destroyed by its light. Watto comments that Link appears visibly stronger since finding the Triforce piece, which Link attributes to its power.

Meanwhile, the Vire returns to Ganon and reports that Link has found one of the Triforce pieces. The news infuriates Ganon and he demands that every minion secure the remaining Triforce pieces as soon as possible. As his minions leave, a Darknut and a Wizzrobe discuss how to halt Link's advance and decide to leave traps around Death Mountain.

That night, Link finds a village being ravaged by monsters looking for him. He defeats them and also spots the Vire who had been spying on him earlier. The following day, Link visits a shop and learns from its Merchant that monsters were seen at Makuto Mountain. As Link leaves to investigate, believing the area to also be Death Mountain, he passes by an Old Woman who immediately recognizes his pendant. She turns to the Merchant and demands he tell her where Link is going. As Link enters Mokuto Mountain, he encounters a group of Lynels who confront him. Watto watches from afar and is then approached by the Old Woman who asks him about the pendant. When they see that Link is gravely outnumbered, Watto flies in to assist him. Together they defeat the Lynels but Link is fatally stabbed by the leader's sword in the process. Link perishes and falls into a dark purgatory, where he is almost seized by a demon but is saved by Princess Zelda's likeness. Meanwhile, Watto and the Old Woman have taken Link's body to a Fairy Fountain and beg the Fairies there to revive him, but they are unable to. Link and Zelda watch the scene from afar. She gives him one last chance to continue, allowing the Fairies to resurrect him in the Fountain's water. In his excitement, Watto then drinks the Fountain's water in hopes it will cure his sore throat, but instead results in an unusual side-effect that makes him grow ten times as big. Before parting ways, the Old Woman gives Link a bottle of Water of Life and a stronger Sword. The Fairies also gift him a Heart Container.

Continuing his quest, Link enters another village in hopes of finding an armory, but the villagers refuse to help him and run away. He then meets a boy named Birī who offers to give him a tour and accompany him for a fee. After buying a new Shield, Link and Birī travel through Hyrule together and find the remaining pieces of the Triforce. During that time, Watto's spell eventually wears off and he returns to normal size again. Ganon meanwhile is losing patience and reproaches his minions' leader, the Darknut, for their failures. Ganon determines that if Link collects all of the Triforce pieces, they will have no choice but to kill Princess Zelda. By the time Link obtains the seventh piece, word of his efforts have spread far across Hyrule, earning him the support of villagers who give him food and supplies for the journey. After slaying Gleeok, Link finds the final Triforce piece which he puts together with the rest to form the complete Triforce of Wisdom. The Old Man then appears before Link and transforms his Sword to become even stronger. Now having the complete Triforce of Wisdom, Link sets off to face Ganon at Death Mountain. He bids Birī good-bye as the battle ahead will be too dangerous for him.

Link eventually finds the entrance to Ganon's castle where he is beset by his minions. After defeating them, Link discovers the Old Man yet again at the castle gateway, who warns him that both the upgraded Sword and Triforce are still not enough to defeat Ganon. Link proceeds ahead and fights even more monsters along the way. Eventually he finds the Darknut leader, who locks Link inside before engaging him in battle. Meanwhile, Birī has returned to his village and rallies the other townsfolk to join the battle and fight alongside Link. Armed with pitchforks and scythes, the villagers storm Ganon's castle and fight his remaining minions inside. Birī finds the room Link is trapped in and the villagers try a battering ram to get inside. Link then kills the Darknut, opening the doors just as the villagers charge in. Link chides Birī for ignoring his orders, but the Old Woman, who also accompanied Birī, gives Link more Water of Life to heal his injuries. Link then instructs the villagers to find Princess Zelda while he goes to confront Ganon alone.

In the final room Link finds Ganon's statue and demands that he reveal himself, using the Triforce of Wisdom to make him appear. In the ensuing battle, Ganon fires a blast of magic at Link and turns invisible, easily overpowering the young hero as he struggles to find him. In desperation, Link then shoots mustard seeds around the room with his Slingshot. His plan succeeds when one of the seeds pelts Ganon and leaves a stain on him, making him partly visible. Link stabs him in the chest but Ganon makes his escape by flying away. Remembering Watto's transformation, Link gives him Water of Life so he can grow into a giant again and together they fly after Ganon. Link recalls the Old Man's words to him and takes out the Silver Arrow, which he launches at Ganon like a harpoon. Ganon is instantly killed by the Arrow, leaving behind the stolen Triforce pieces.

The victory is short-lived however, when Link and the villagers discover that Ganon had killed Princess Zelda prior. The Old Man appears a final time and says it still possible to revive Zelda using the magic pendant, and instructs that Link lay down beside her. The Old Man then uses the two Triforces and prays to the Gods that Zelda be restored to life. His prayers succeed and Zelda awakes as the villagers cheer. Peace and balance are finally restored to Hyrule and Link is lauded for his bravery.

Watto is a talking parrot who accompanies Link throughout his journey. He is notably greedy, even suggesting that they give up their quest and become rich by killing monsters instead. He has a strange side-effect to Water of Life, which makes him grow ten times as big whenever he drinks it.

Birī is a young boy from a village who accompanies Link in finding the remaining seven pieces of the Triforce of Wisdom. When Link ventures to Ganon's castle, he returns to his village and rallies the townsfolk there to fight Ganon's minions.

Hekuraresu is a giant man who saves a village from a group of Moblins in exchange for a girl's food as payment. He encourages Link to call on him whenever he is in danger. Hekuraresu is later killed by monsters in the first Dungeon.