The Legend of Zelda (Gamebook)

The Legend of Zelda (Gamebook) 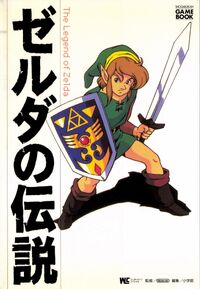 The Legend of Zelda is a gamebook published by Shogakukan on December 20, 1997.[2] It is based on A Link to the Past, specifically the Dark World portion. There is a heavy emphasis on the Dungeons of the game.

The prologue recounts Link's backstory, how he lost his parents when he was young and was raised by his aunt and uncle in Kakariko Village. As the book begins, Link is atop the Pyramid of Power in the Dark World, reflecting on his triumph over Agahnim and acquisition of the Master Sword. Sahasrahla communicates with Link through the Magic Mirror, directing him to the Swamp Palace.

What follows is a fairly straightforward but abbreviated adaptation of the Dark World segment of A Link to the Past. Link conquers the Swamp Palace, Thieves' Town, and Misery Mire, rescuing two Maidens in each. After being released from their Crystal prisons, their spirits enter Link's body and advise him as he continues on his journey. When Link then clears Turtle Rock, Princess Zelda appears and directs him to Ganon's Tower.

After fighting through the Tower and defeating Agahnim, Link goes back to the Pyramid to confront Ganon. He defeats him and finds the Triforce, and wishes for peace to return. An epilogue shows the Light World at peace, the transformed Dark World denizens restored, and Link returning the Master Sword to its pedestal and flying off with Princess Zelda atop the weathervane bird.