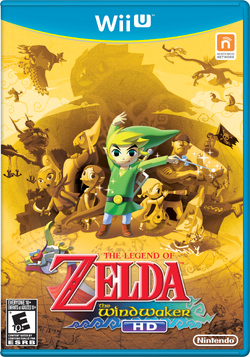 The Legend of Zelda: The Wind Waker HD guide
at StrategyWiki

The Legend of Zelda: The Wind Waker HD is a Wii U enhanced remaster of the Nintendo GameCube game, The Wind Waker. It was officially announced via a Nintendo Direct webcast on January 23, 2013. Further information on the game was revealed at E3 2013 and in subsequent Nintendo Directs.

The Wind Waker HD first became available on September 20, 2013 as a digital download from the North American Nintendo eShop.[2] Two limited edition bundles of the game—one a special edition Wii U Deluxe Set, the other including an exclusive figurine of Ganondorf—were also released in North America and Europe.

The remaster has more detailed graphics than the original, namely rendering at a higher resolution, a new lighting engine and higher resolution textures. Some changes to gameplay were also made, the most significant of which include new items—namely the Swift Sail, the Tingle Bottle, and an improved Picto Box—as well as the addition of a Hero Mode.

Being a game for the Wii U, The Wind Waker HD runs at 1080p, compared to the original game's 480p. The remaster uses an enhanced version of the original game's cel-shading, the soft-shading. It utilizes a full-fledged lighting and shadowing system that allows for more realistic and fuller lighting than the original.[8] The remaster also features bloom lighting to give a sense of "surreal realism".[9] In low-light areas, the cel-shading gives way to a softer, more realistic shading system. The lighting from torches and other point light sources is now much softer and more realistic, and objects now subtly reflect the color of nearby light sources. Other shaders are used to increase the expressivity of characters. The textures used are the original high-resolution ones created during development of the original game, which used scaled-down versions of the textures to match the GameCube's hardware capabilities. 2D elements such as icons and the HUD are completely redrawn to match the style of the game's promotional artwork.

Heat wave effects in Dragon Roost Cavern now only appear when the fire fountains are spouting. When Link uses a Warp Jar, the transition effect is a shrinking/growing circle instead of the fade-out in the original game.

The shallow water in the boss room for Puppet Ganon, which in the original game did not reflect Link and some other objects, now reflects everything within the room.

Though all other graphical elements were updated for high-definition display, the 3D models and character animations of the original game were left untouched in the remaster.

Music in The Wind Waker HD uses higher-quality instrument samples than the original game. The updated instruments are most noticeable in fanfares and some boss themes. Some music includes new instrumental tracks, creating a fuller sound. However, most sound effects are unchanged from the originals.

The gameplay in The Wind Waker HD has been tuned up from the original to enhance the player experience. The Triforce Shard Quest has been shortened; five of the eight shards are now found directly without having to go through the process of decrypting a Triforce Chart. Certain item usage cutscenes, such as the cutscenes that play upon using the Grappling Hook to swing and salvage, have been shortened.

Some items, such as the Picto Box, have new and improved functions. The Picto Box can now store 12 pictographs as opposed to 3.[10] Link is now able to take self-portraits while making any of nine facial expressions.[10] Upon activating the Nintendo Gallery side quest, a mark appears in the upper left corner of pictographs that are eligible for figurine-making. In addition, Carlov can now sculpt up to 12 figurines per day, as opposed to only one. The gallery can thus be completed more rapidly and efficiently. All pictographs can be sent to other players in the Tingle Bottle. The receiving players can add the pictographs to their own Picto Boxes and use them to complete their Nintendo Gallery. Additionally, he no longer needs a Forest Firefly for the Deluxe Pictobox.

Sailing has also been improved with an upgrade to the sail, called the Swift Sail. The Swift Sail enables the King of Red Lions to sail faster by pressing the A button. In addition, it automatically changes the direction of the wind to the boat's heading. This replaces the function of the A button in the original game, which was used to stop the boat from sailing. The changed functions came about as a result of technical limitations in the original; the GameCube version loaded only a single "chunk" of ocean as Link traveled, requiring the slower sailing speed to mask loading times[11], while the Wii U can and does load the entire Great Sea at once. This does, however, result in occasional framerate issues, particularly during rainfall.

The Tingle Bottle allowed players to send messages through Miiverse

The Tingle Bottle, which allowed players to randomly send messages to other players, replaces the Tingle Tuner in the original game. The Tingle Bottle was used to send messages in bottles, which will subsequently appear on the shores of other players' islands.[12] The Tingle Statues, previously only accessible via the Tingle Tuner's Tingle Bombs, can now be obtained with regular Bombs. Knuckle now appears on Tingle Island after all five statues have been found.

Link's actions have been altered slightly. He is now capable of changing direction while swinging on a rope, without having to stop first. He can also move while in first-person view while aiming the Grappling Hook, Boomerang, Hero's Bow, and Hookshot. However, the shield button is no longer the "grab" button for draggable objects, and instead both the "grab" and "climb" commands are part of the primary action button, making block controls act like older games.

The game includes a higher-difficulty Hero Mode, but unlike other incarnations it has no unlocking requirements, and can be toggled on or off when starting a new game or when a save game is resumed.[10] Recovery Hearts do not appear in Hero Mode, forcing Link to use potions to regain health.[10] In addition, enemies deal double the amount of damage as in normal gameplay.[13]

The game supports GamePad-only play, allowing for play without a television, as well as control with the Wii U Pro Controller, for those who prefer a traditional control scheme. During use of the Pro Controller, the GamePad can still be used as a map.

Other altered gameplay elements include:[10]

Because The Wind Waker HD was developed for control with the Wii U GamePad, additional control methods have been added. The Inventory has been made accessible through the GamePad's touchscreen, with no need to pause the game. It is now possible to slide an item icon on the GamePad to one of the three slot icons at the top of the screen, allowing players to switch items quickly. The older style of item selection by pausing and using the d-pad and buttons must be used when playing the game with the Wii U Pro Controller, and may also still be used with the Wii U GamePad.

Some items, such as the Wind Waker, are permanently mapped to certain buttons as opposed to being equipped to the three item slots. This allows players to quickly and conveniently access these items, as they are key to playing the game.

First-person aiming of items is achieved through either the right analog stick or the GamePad's gyroscope, though there is an option to disable the gyroscope. Link can also move in first-person mode, though item usage is limited to ranged weapons such as the Hero's Bow.[10]

Some cutscenes where Link makes a facial expression silently have voices added to match the expressions. The ending cutscene and staff credits, which were prerendered in the original game, are now fully real-time cutscenes in the remaster. However, the smooth transition effects from the original cutscenes (the first part of the ending cutscene transitions with a fade effect to the credits, which then fade to the second part of the cutscene) have been replaced by fade-to-white effects, presumably due to the difficulty of implementing the original cutscenes' transitions in real-time rendering.

The intro cutscene, which plays upon the start of a new file, is skippable, but no other cutscenes are.

The game was officially announced on January 23, 2013, in which only a couple of screenshots featuring Windfall Island, Link, Tetra, and Sue-Belle were shown. The decisions to remaster the game came after the team decided to attempt to upscale the game's graphics to the Wii U's HD capabilities, after doing the same to the graphics of Twilight Princess in E3 2011. The game was also designed to decrease the gap in time between the release for Skyward Sword and Breath of the Wild.[14]

Nintendo showed the first trailer for the game during its E3 Direct livestream on June 11, 2013, revealing the game in motion as well as some of the new features of the game.

The Legend of Zelda: The Wind Waker HD Sound Selection