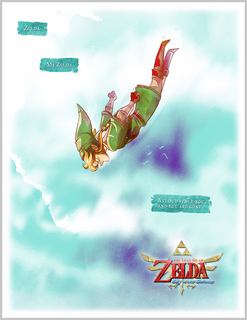 The Legend of Zelda: Skyward Sword is a comic about the eponymous game written and drawn by Mike Krahulik and published by Penny Arcade.

On November 15, 2011, Nintendo announced that they had commissioned Penny Arcade to release a five-page comic loosely based on Skyward Sword.[1] According to the artist Gabe, Nintendo did not want Link to have an internal monologue, so the comic is told from Gaepora's perspective on how it must feel to have his daughter Zelda kidnapped while solely depending on Link to save her.[2]