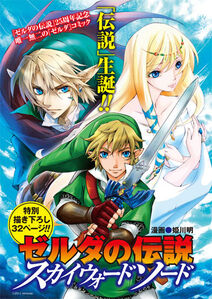 The Legend of Zelda: Skyward Sword is a manga loosely based on the eponymous game drawn by Akira Himekawa. All 32 pages of the manga were included in the artbook, Hyrule Historia.

The manga serves as a prequel to the story of Skyward Sword, detailing the origin of the relationship between Zelda and Link, Link's relationship to the goddess, Hylia, and the tale of how Skyloft rose into the sky.