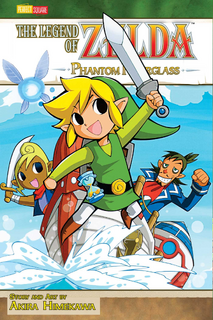 The cover of the Phantom Hourglass Manga

The Phantom Hourglass game-to-manga adaptation first appeared in Shougakukan Magazine in Japan, and was then collected into one volume and released separately on February 27, 2009.[2] It was later released in English by Viz Media on September 7, 2010.[1] It is one of the many Zelda mangas by Akira Himekawa. The story follows the main framework of the game, but is shortened and simplified after clearing the Ghost Ship in the middle of the game. The main characters starring in the manga are truthful to the game; Link, the main protagonist, Linebeck, Ciela, Oshus, Tetra, and Bellum, the antagonist. There are several notable differences in the manga and the actual game.

A Legendary Edition also containing The Minish Cap manga by Akira Himekawa was released in North America on May 9, 2017. It features new cover art and color pages.

The manga expands more on the Ghost Ship, saying Linebeck was a part of a group of pirates who found the ghost ship and the "treasure", but were cursed and their life force was stolen by one of the Cubus Sisters. Only Linebeck survived by escaping on the pirate's lifeboat, leaving everyone else to die. When Link, Linebeck, and Ciela reach the Ghost Ship, Linebeck refuses to get on board but eventually does so. They find one of the Cubus Sisters and Linebeck merely laughs and asks her how many sailors she has fooled with the same story. The Cubus Sisters then attack and strike out at Link, but one of them attacks Tetra's stone body. Princess Zelda's spirit comes out of the stone and reflects the sister's power back out at her to save Link. He manages to defeat the last one by merely slashing it with his sword.

Another difference is that Link doesn't even collect the Pure Metals needed for the Phantom Sword and Jolene instead simply asks Zauz for his aid. He accepts and forms the sword, but it's unknown if he had already had the metals to begin with. Meanwhile, while Jolene was getting the blade, Link was busy fighting with the Bellum-possessed Linebeck not on the Ghost Ship, but instead on the final floor in the Temple of the Ocean King where, in game, Link fights only Bellum. Linebeck gets back in control for a moment and tries to commit suicide in order to save Link, saying he wouldn't forgive himself if he hurt Link. However, this doesn't happen, as the Phantom Hourglass suddenly activates and freezes time, allowing Link to defeat Bellum and remove him from Linebeck.

It seems all is right and Oshus reverts back to his own form again, but Bellum is still not dead. Bellum attacks the Ocean King. Jolene then returns and gives Link the Phantom Sword needed to slay Bellum. Tetra then directs the ship and they start to attack Bellum with the Cannon. They manage to free Oshus from Bellum and Link slays Bellum by performing a super spin attack (otherwise known as the Great Spin Attack), finally killing the evil beast. Oshus then says goodbye to Link and Linebeck makes a wish. Link and Tetra wake up back on the Ghost Ship and everything seems to be a dream, but Link sees Linebeck on the horizon, noticing his wish was to be in the same world as Link.