The Legend of Zelda: Oracle of Seasons (Himekawa) 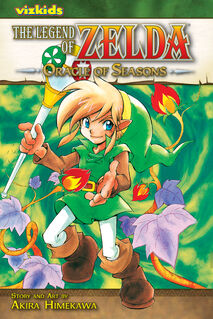 A Legendary Edition also containing the Oracle of Ages manga by Akira Himekawa was released in Japan on May 27, 2016 and on January 10,2017 in North America. This premium edition features new cover art and color pages.

Link, a young boy growing up on the Hylian countryside, lives with his grandmother and grandfather, part of a long family history of heroes. When a young chick, Piyoko, hatches, Link finds a friend in the young bird. His grandfather disagrees with his lifestyle and forces Link to train to become a knight against his will. Torn between destiny and happiness, Link decides to journey to the castle with Piyoko to take the knight's trial. As he makes his way through Castle Town, he finds a glowing emblem of the Triforce and an golden mark of the Triforce on Link's hand begins to glow. Within a few seconds, Link awakens within the far land of Holodrum with Piyoko, a sword, and a shield. He wanders into a town and catches sight of a group of traveling performers.

As Link travels closer to the group of traveling performers, he notices Din. She calls him from the audience to dance with her. Embarrassed, Link runs far away, and accidentally runs into General Onox. Onox gives his servants the order to kill Link. The villain sucks the life out of the area and Link. The young hero falls to the ground, unconscious. As Din begins to chase after him, she notices Link in the midst of a completely bare and dead forest. Din calls upon the power of the Season Spirits to bring Link back to life. He awakens with the group of performers, Din, and Impa.

Link begins to preform with the troupe. Din tells Link that he shouldn't stay if he doesn't want to, and, later that night, Link's grandfather appears in a dream. He blames Link for his weaknesses and tells him to come back. It is revealed that Onox is back, searching for Din, and is planning to ambush them as they approach the Temple of Seasons. Din and Link, as well as the rest if the troupe are traveling to Natzu Prairie and the Temple of Seasons. A young boy from the troupe asks Link to train him as a knight, but Link refuses. Angered, the boy accuses Link of being selfish.[6] As he runs from the boy, he sees Din and Impa having a serious conversation. As Din sees him approach, she leads Link into the temple tower.

Din transforms into her true form, the Oracle of Seasons. Impa also reveals her position as Princess Zelda's nursemaid. Confused, Link asks Din why she hid the truth. She tells him that it is to protect herself. Before he can ask why, lightning strikes the temple and they rush out. Onox appears and Link challenges him, but the hero is beaten badly. Onox reveals his plan to capture the Oracle of Seasons. Link runs up and slashes at him, but Onox reflects it and disappears along with Din.

Link regains consciousness in a deep forest, next to Piyoko. Link rushes over to the chick, and, to his surprise, she speaks to him, telling him to cheer up. Piyoko informs him that the power inside him is awakening. The Triforce crest on his hand begins to glow, and he is transported near the Great Maku Tree. It awakens and tells Link that he must rush to rescue Din. Before he can leave, the tree gives Link a bag with Mystical Seeds inside.[7] Later, as Link passes a house, a kangaroo crashes through the wall. It regains consciousness and introduces itself as Ricky, the boxing kangaroo.

Ricky tells Link how he lost his gloves to Blaino in a boxing match. The young hero rushes to Blaino and challenges him. Blaino smirks and dares Link to bet his sword on the outcome of the match. The hero taunts Blaino about his round body, which causes the creature to retaliate fiercely. Just as Link is about to give in, the Triforce begins to glow. Quickly and fiercely, Link uses the Special Triangle Punch, wounding Blaino, who then wobbles about, senseless. He then wakes up from Onox's influence and tells the hero his story. Ricky starts to giggle and asks Link if they can travel together. He agrees and they set off. However, before long, their journey is interrupted by Manhandla, who snatches Piyoko and swallows her. Ricky punches the creature, causing Manhandla to regurgitate the chick. Link then throws an Ember Seed at the monster, which causes it to burst into flame and die. A Portal appears and the hero and his companions are sucked into another dimension.

The portal drops the trio in the volcanic land of Subrosia. They see the Temple of Seasons nearby and begin to wonder how it got there. Afterwards, a volcano erupts, and they run inside to avoid the rain of fire, but once inside they discover that someone searched the temple before they got there. Meanwhile, the young witch Maple is using a crystal ball to find the Rod of Seasons. She sees the trio inside the temple and begins using illusions to try to scare them away, but Piyoko realizes they're fakes. Link destroyes the illusions and discovers Maple, who runs deeper into the temple. She begins trying to summon a spirit to help her and stumbles upon Medelock, who, thinking she is the chosen one, begins chasing her through the temple. The trio find Maple and Medelock and attack it. Medelock starts firing lasers to try to kill them, but Link uses a Pegasus Seed to avoid them. Ricky distracts Medelock by punching a rock into its face, and Link uses the opening to slice Medelock in half. Soon afterwards, the Season Spirits thank Link for ridding them of the curse, and give him the Rod of Seasons. Maple decides to go with them, so she can steal the rod by gaining their trust. The four heroes then continue their quest to Onox's Castle.

Atop Onox's Castle, the general taunts Din about Holodrum's transformation into a desolate wasteland. As she replies, Link learns about his new weapon- the ancient Rod of Seasons. Maple unsuccessfully tries to take it from the hero, but, as they bicker, they advance upon Onox's stronghold, traversing land soaked in darkness. They adventure up the mountaintop, and the green-clad hero wonders about their vulnerabilities. Continuing farther up, an old, frail woman begs the travelers for help. Revealing his weakness of kindness, Link helps her up, but not before pondering how she reached the rocky peak. Her weight drags him down and the three heroes crash into the dangerous depths below them, only to be swarmed by monsters. The lady reveals herself as the all-powerful Twinrova witches as the heroes attempt to fight against her minions. Ricky stands up for his two friends and risks his life to fight for their lives.

Ricky bravely takes on the demons with immense power, although Maple frets he's not good enough, grabs the Rod of Seasons and flees in the confusion. True to her word, the kangaroo is knocked out to Link's distress. As he tries to revive his fallen friend, a sleepy baby-blue bear rises out of the barren ground to the heroes' surprise. Ricky recognizes it as Moosh, an old friend of his. As they attempt to convince the bear to help them and fly up the jagged peak, Moosh's flaw is revealed: he realizes everything extremely slow. After recovering from the shock of noticing the monsters, he agrees and lifts the travelers to Onox's Castle. A fierce battle soon unfolds between hero and monster as Link struggles to dodge the armored menace's brutal strikes and pierce his armor in the brief openings. As the blonde boy braces himself for his fatal blow on Onox, the general summons Din's crystal, cutting of the boy's attack in mid-jump and causing his sword to intersect with Din. Meanwhile, Maple frets about Link's well-being as she floats away with the rod. Convincing herself he's not worth it, the witch instead heads full-speed backwards on her disobedient broom, colliding into the fortress. She smashes into the falling Link and raises the Rod of Seasons, to find that it attracts Din's crystal to it, developing a strategy. As his shield flees, Onox reveals his true form- that of a deadly dragon.

Unlike the game the manga is based on, the Link from Oracle of Seasons is not the same Link from A Link to the Past. Also, a shorter one shot version of the manga is included in the legendary edition that was written before the main manga.