The Legend of Zelda: Oracle of Seasons (Japanese title: ゼルダの伝説 ふしぎの木の実 大地の章, Zeruda no Densetsu: Fushigi no Ki no Mi: Daichi no Shō, meaning: The Legend of Zelda: Nut of the Mysterious Tree: Chapter of the Earth), together with its counterpart, are the seventh and eighth installments in the Legend of Zelda series. It was published by Nintendo and developed by Flagship, with Nintendo overseeing development. Although the game was originally released for use on the Game Boy Color, it exhibits special features, such as an additional shop, when played on a Game Boy Advance.

This game is the counterpart of The Legend of Zelda: Oracle of Ages, which was released on the same day. These two are "linked" to each other, meaning that with the help of a password received after the completion of one game, the player can experience a slightly different game with subtle changes on a new game save on the other game, allowing them to see the game's true ending. By using a password system, items exclusive to these linked games can be transferred to the original password save on the other game. The games can also be linked with the help of a link cable, allowing two systems to transfer Magical Rings to one another.

These two games were originally going to be themed parts of the Triforce Trilogy along with Mystical Seed of Courage. Each of the three games originally had a piece of the Triforce and one of its qualities (Wisdom, Power or Courage) assigned to them. This idea was scrapped relatively late in the development process, and the games were re-branded to remove all mention of this Triforce theme. The Triforce Trilogy was also originally going to have a remake of The Legend of Zelda as one of the games included in it, with Holodrum's design being left over from this idea.

Called by the Triforce, Link travels to the shrine of the sacred relic. He is beckoned by the sacred triangles, and they transport him to a world known as Holodrum, which is in dire need of the legendary hero.

Link awakens near some stones near an area known as North Horon. He hears distant music, and gets up. Nearby, he finds a traveling troupe of performers, who are enjoying a dance performance by Din, a majestic dancer, another member of the troupe. Link also meets an old woman called Impa, the troupe's cook. Din asks Link if he would like to dance with her, and he agrees. However, all of a sudden, the skies grow dark, and the antagonist, General Onox, presents himself. He reveals that Din is in truth the Oracle of Seasons, a descendant of a line of oracles who have the power to change the seasons of Holodrum. Before disappearing from the scene with Din, Onox calls forth a huge tornado that blows away Link and the troupe members. Onox seals Din inside a crystal cage, and lowers the Temple of Seasons deep beneath the earth, throwing the seasons of Holodrum into chaos, ruining crops and causing despair and misery throughout the land.

Link awakens in the care of Impa, who tells him about the current situation. In order for Link to confront Onox and rescue Din, he must talk to the Maku Tree. Link finds the gate to the grove of the Maku Tree locked. In order to prove his worth, he is told to brave the Hero's Cave and retrieve the sword therein. He successfully does so, and enters the grove of the Maku Tree. However, the Maku Tree has been sapped of its power and does not recall how to stop Onox. He informs Link that Onox has also taken the eight Essences of Nature, mysterious items containing the very essence of the various aspects of nature and growth. If Link retrieves these, the Maku Tree will be able to return to his true power and thusly, he will be able to produce a Maku Seed that can dispel the barrier that deters outsiders from entering Onox's Castle.

Link eventually finds a portal to a subterranean world known as Subrosia, populated by the cloaked Subrosians. Here, he also finds the ruined Temple of Seasons. He finds his way into the temple, where he communes with the spirit of winter. To aid him in his quest, the spirit presents him with the Rod of Seasons, a mythical object that allows the user to change the seasons to their own liking. In order to use the rod to change the seasons further, he must find other portals leading into the three other towers of the ruined Temple. Eventually, Link manages to add the power of every season to the rod.

After many trials and tribulations, Link manages to recover all eight Essences of Nature. As promised, the Maku Tree produces a Maku Seed. The Seed dispels the barrier around Onox's Castle. Inside, Link encounters General Onox in a decisive battle. Realizing the threat that Link poses, General Onox tries to stop Link by transforming into his true form; that of a giant Dark Dragon. Despite this, General Onox is ultimately defeated by the young hero, and Din is released from her prison and the seasons are returned to normal. However, General Onox ultimately succeeded in accomplishing what Twinrova, the evil being that had been controlling his every move wanted him to; to cause enough destruction and suffering in Holodrum to light the Flame of Destruction. According to Hyrule Historia, this leads into The Oracle of Ages.

Along with several dungeon areas, Oracle of Seasons features two lands for Link to explore: Holodrum and Subrosia.

As the game's overworld, Holodrum is where much of Link's adventuring takes place, as well as the majority of his interactions with other characters. However, also present in Oracle of Seasons is a hidden subterranean plane called Subrosia, which can be accessed from Holodrum. This volcanic area is inhabited by strange, cloaked creatures known as Subrosians. Subrosia acts as a go-between with the upper world, with shortcut portals to take Link to different parts of Holodrum quickly. Similarly, warping to different locations on the overworld can lead to different Subrosia portals, allowing access to isolated areas of Subrosia that cannot be reached via the underground plane alone. The name "Subrosia" is derived from sub rosa, meaning "secret", and the people of Subrosia are very secretive about their rare movements in the overworld.

Together, Holodrum and Subrosia are a full 43% larger than Labrynna, the game world of Oracle of Ages. However, unlike Oracle of Ages, Oracle of Seasons features no past version of its lands to traverse, calling into question which game actually provides more world to explore.

The linked game also has many extras. Some items move around and must be found in different places. Princess Zelda appears and must be rescued. The pirates appear in a different place, and in the linked version of Oracle of Seasons, it is mentioned that Cap'n was the long-lost lover the Oracle of Ages character Queen Ambi has been waiting for. Also, once Veran is defeated, the witch Twinrova appears. Veran and Onox are revealed to have been controlled and manipulated by Twinrova in order to light the Flames of Sorrow and Destruction. Upon kidnapping Princess Zelda, the third flame, the Flame of Despair, lights, and Twinrova attempts to offer Zelda as a sacrifice, along with the energy of the three Flames, to revive Ganon. Link must then enter Twinrova's lair and stop the ritual. Upon completing the linked game, players receive yet another password. When used to start a new game, players receive the Victory Ring, which commemorates their defeat of Ganon.

The official but non-canon manga introduced plot-lines and characters that were unidentified in the original game. It introduced Link's establishment that he lived in the country. It also introduced more of the Traveling Troupe and gave names to the unidentified characters. They included Johvan the troupe leader, Barrot the guitarist, Mel and Rom, tambourine-playing twin sisters, and finally Jonvan's son Rishu, who aspires to become a fighter. Link himself is hinted to have a crush on Din. Also included was a small Cucco chick named Piyoko, who acted as one of Link's companions. 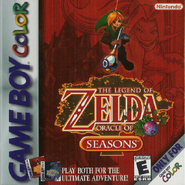 The box art for Oracle of Seasons

The title screen for Oracle of Seasons

Retrieved from "https://zelda.fandom.com/wiki/The_Legend_of_Zelda:_Oracle_of_Seasons?oldid=544639"
Community content is available under CC-BY-SA unless otherwise noted.