The Legend of Zelda: Ocarina of Time Master Quest

The Legend of Zelda: Ocarina of Time Master Quest 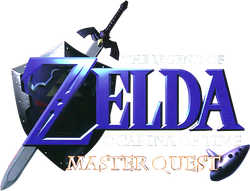 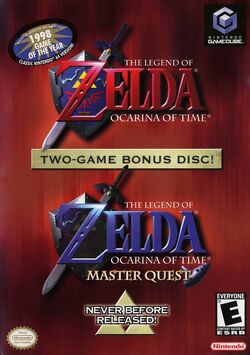 The Legend of Zelda: Ocarina of Time Master Quest guide
at StrategyWiki

Master Quest was first made available for the Nintendo GameCube on a special bonus disc that also contained the original Ocarina of Time. This disc was given out in limited quantities with pre-orders of The Wind Waker. Additionally, it was sold packaged with The Wind Waker in some regions. It is also available as a mode in Ocarina of Time 3D after first completing the regular game.

Changes from Ocarina of Time

The most notable feature of Master Quest is that every dungeon in the game has been modified to increase the difficulty of the game. Each one features a different layout, changing the progression through the levels. Enemies are spread differently throughout the dungeons, and tougher enemies are encountered much earlier on than in Ocarina of Time. In addition, some Gold Skulltula locations in dungeons have been moved, and certain items that are optional in the original version are now mandatory to complete the game.

Both games are emulations, rather than direct ports to the GameCube, and are displayed at an increased 640×480 resolution compared to the 320×240 of the Nintendo 64 versions.

Master Quest for Ocarina of Time 3D is not available from the start. To unlock it, the main quest has to be completed first.[2] Upon doing so, the player will have an option to choose between the Main Quest or the Master Quest after starting up the game, allowing a second playthrough of the game with redesigned dungeons.

This version of the Master Quest has two significant changes. The entire game has been mirrored, similarly to Twilight Princess for the Wii, making Link right-handed as well as flipping the entire overworld map and the dungeons.[3] In addition to the game being mirrored, all of the enemies and bosses will cause twice as much damage to Link, which also applies to the Master Quest's own Boss Challenge version.[4]

The disc also includes preview trailers for then-upcoming games for the GameCube and Game Boy Advance. The selection of trailers differ by region, with Japan having more trailers from different companies and promoting the "Capcom Five". The A Link to the Past & Four Swords trailer is also different, having narration and focusing more on the Four Swords in the Japanese trailer.

Shigeru Miyamoto announced that an expansion would follow Ocarina of Time, tentatively known as Ura Zelda. The expansion was purpoted to include rearranged dungeons from the original game. The Nintendo 64DD became a commercial failure in Japan, and so most of Nintendo's planned titles for the 64DD, including Ura Zelda, were never released. Miyamoto insisted that the game would continue to be developed, and in August 2000 indicated that Ura Zelda had been completed for some time.[7] Despite this, Nintendo could not decide on how to release the game, and considered different methods such as a magazine tie-in.[8]

Remnants of Ura Zelda's 64DD origins still remain in Ocarina of Time. Several error messages exist in the game's data regarding wrong disks being inserted. A "Disk" tag can also be made to appear in the title screen by modifying the RAM addresses of the game. A save file can also be flagged as a "Disk" save and a "Disk" icon will appear next to the save file on the file select screen. The file will be permanently grayed out and inaccessible, unless the game is tricked into thinking the expansion disk is inserted. Attempting to open the file afterwards will crash the game, presumably due to the game trying to load non-existent files.[9]