The Legend of Zelda: Ocarina of Time 3D Official Soundtrack

The Legend of Zelda: Ocarina of Time 3D Official Soundtrack 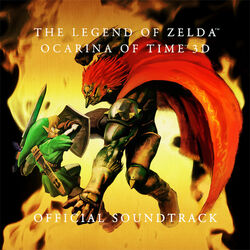 The CD contains 50 tracks from the game, some never released in the American Ocarina of Time OST. It also includes one orchestrated medley especially recorded for the soundtrack. Included within are the new character illustrations created for the 3DS version of the game, as well as a special message from Shigeru Miyamoto and Koji Kondo.[1]