The Legend of Zelda: Oath of Riruto

The Legend of Zelda: Oath of Riruto 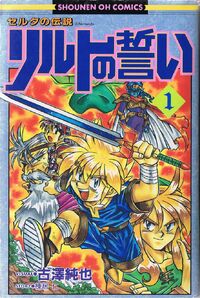 Japan:
• ISBN-13: 978-4-334-80379-7
The Legend of Zelda: Oath of Riruto (ゼルダの伝説: リルトの誓い, Zeruda no Densetsu: Riruto no Chikai) is a manga created by Junya Furusawa and Jin Munesue. The series was only released in Japan, where it was originally serialized in Shounen Oh (少年王), a bimonthly manga anthology magazine published by Kobunsha. The series began in the December 1994[5] issue and concluded in the April 1997[6] issue, which was also the final issue of the Shounen Oh magazine.

The series was collected into four paperback books, with each volume containing three to four chapters revolving around the protagonist Riruto, who makes an oath to rescue his childhood friend Kalin who is kidnapped by Ganon's monsters and later his henchmen, Nabat, Haggis, Glasgow and Hoody in an attempt to resurrect him using her powers. Upon discovering the Master Sword and being taught by Link how to use it, Riruto sets out on his quest alongside many new friends that he makes along the way to stop Ganon's resurrection and find Kalin.

*Ganon is the main villain of the story and the leader of the psychotic henchmen that captured Kalin in order to use her powers to resurrect him. He is only shown in his beast form.

*Nabat is the leader of Ganon's henchmen with an oddly distinct red eyes with yellow pupils, a scar under his right eye and a blue skin color, as well as the most knowledgeable of spells.

*Haggis is the second in command of Ganon's henchmen and both the strongest and bloodthirsty of the group, skilled in both sword and archery combat. In his strive for power, he killed two of his fellow comrades.

*Glasgow is one of the lower members of Ganon's henchmen more distinguishable for his eyepatch. He assists in uniting the Triforce, shortly being killed by Haggis later after being betrayed.

*Hoody is one of the lower members of Ganon's henchmen more distinguishable for his bandana. He assists in uniting the Triforce, shortly being killed by Haggis later after being betrayed.

*Gonza is a boy who Riruto meets during volume two and helps Riruto throughout the story. He is the only character who uses Bombs.

*Kāla is a girl who Riruto meets during the later part of volume two alongside Cho. She helps Riruto throughout the story and can be seen carrying a ferret-like animal that can transform into a giant, worm-like creature.

*Cho is a friend of Kāla that specializes in using traps. Upon befriending Riruto, he gives him his Power Bracelet to help with picking up heavy objects.

*Kalin is Riruto's childhood friend who gets kidnapped during the events of the story by monsters and Ganons henchmen. Her first kidnapping is what starts Riruto's adventure and the manga's plot.

*Riruto is the manga's main character of the series and a pupil of Link, closely resembling him in many ways with a light difference of clothing. Upon gaining the Master Sword, he quickly learns of Ganons revival and Kalins capture.

*Link serves the role as Riruto's mentor that helps encourage him and teach him how to use the Master Sword alongside Mōtone.

*Mōtone is a knowledgeable old man who is introduced to Riruto by Link. They are the only characters he makes interaction with during the story.

*Zelda is a rather minor character in the manga that appears during the introduction and helps Kalin from near death during the final battle with Haggis near the end of the volume four.