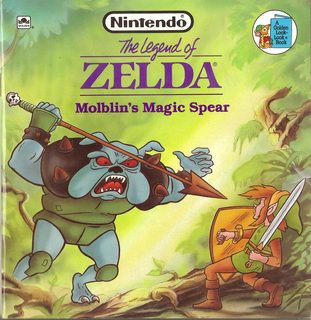 The Legend of Zelda: Molblin's Magic Spear is a children's picture book based on the Legend of Zelda series. It takes place during the storyline of the original The Legend of Zelda game. It was written by Jack C. Harris and illustrated by Arthur Ellis and Kim Ellis. It was published by the Golden Books division of Western Publishing on February 1, 1990.[1]

In the story, Link decides that he needs more magical powers in order to rescue Princess Zelda. In his travels, he encounters a strange man who tricks Link into falling down a pithole into his shop. The man apologizes for the misunderstanding and Link ends up buying bombs and a shield. Link gives the man the last of his Bottled Water in exchange for an explanation of the shield's secrets. After giving the man the water, however, he only tells Link that "For this swallow of water I'll tell you this: Your shield will swallow a hit to a miss!".

Link continues on his travels, unsure of the meaning behind the old man's riddle. Eventually, he stumbles upon a Moblin (spelled as "Molblin") who forbids him from traveling through its territory. Ganon and the imprisoned Princess Zelda watch through a crystal ball as Link dodges the Moblin's magical spear, which disappears and then reappears in the Moblin's hand as it misses its target.

Eventually, Link notices that the Moblin has poor eyesight. He decides to build a dummy out of bushes with one of his bombs for a head. But as Link is finishing the dummy, the Moblin catches up with him. Suddenly, as the Moblin begins throwing his spear again, Link realizes that the old man meant to say that his shield could magically reflect enemy attacks. He allows the spear to hit his shield and the spear disappeared with a blinding flash of light.

With the Moblin's magical spear gone, the creature now had to find Link by himself. Link finished his dummy and lit the bomb. The Moblin's poor eyesight led it to believe that it had really found Link, causing him to pick up the bomb. The bomb exploded in the Moblin's face, allowing Link to escape.