Template:Future game Template:Game The Legend of Zelda: Majora's Mask 3D is a Nintendo 3DS remake of the Nintendo 64 game, Majora's Mask. It was officially announced during a Nintendo Direct on November 5, 2014[1], and is directly comparable to Template:OOT3D. The game's launch in both North America and Europe coincides with the launch of the New Nintendo 3DS and New Nintendo 3DS XL systems, and it is the first game to feature New 3DS-exclusive features.

Much like Ocarina of Time 3D, the 3DS version of Majora's Mask is an remake of the original Nintendo 64 game, taking advantage of the more powerful hardware and fitting modern standards. It is the first version of the game that is not an emulation, as the GameCube and Wii versions are. As such, most textures are significantly more detailed, and many models consist of more polygons than the original. Character designs have been updated to reflect their Ocarina of Time 3D counterparts. The frame rate has also been increased from the original game's 20FPS.

Most of the original HUD has been moved down to the touch screen, leaving the upper screen mostly clear of graphic overlays. Only the A button prompt and clock still appear in the top screen. The clock was redesigned as a bar that displays the full three day cycle, which now also shows the minutes. The bottom screen displays the item inventory and map. It also displays Link's Heart Containers, Magic Meter, and Rupees.

Owl Statues can be activated by just checking them and are now used to permanently save the game. Some Owl Statues were relocated and a new type of statues, called Feather Statues, were also added.[2] The "Song of Double Time" lets Link to jump to a specific hour of the current day.[3]

Link's mask transformations were also altered. When performing Deku Link's Spin Attack, the tip of his hat transforms into a root. Hopping farther on water now requires extra speed before performing a Spin Attack. When shooting a Bubble Blast, a sight appears when going into first person perspective. Also, the bubble does not burst if charged for too long. Goron Link's attacks are executed faster. Zora Link now swims at a slower speed, making navigation of tight underwater corridors easier. The original swimming mechanics are merged with the Electric Aura attack, which drains the Magic Meter when executed. All bosses feature a new weak point in the form of an eye. Some of them are fought in a different manner, with boss rooms also featuring several new elements.[4]

When playing on a New Nintendo 3DS or with the Circle Pad Pro, the extra Stick allows full camera control.

Sheikah Stones make a return from Ocarina of Time 3D. They are big Gossip Stones that allow Link to see short gameplay clips called visions. These visions can be used to figure out puzzles or where to go next if stuck. 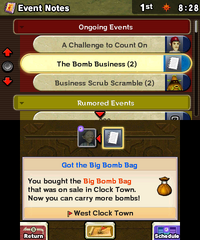 Event Notes from the Bombers' Notebook

Eiji Aonuma, producer of the Zelda series, had previously discussed if Majora's Mask should be remade for the Nintendo 3DS, taking into consideration the positive reception of Ocarina of Time 3D.[7] Fans in response had created a campaign named "Operation Moonfall" aiming to convince Nintendo to create the 3D remake.[8] On November 4, 2011, he announced that the remake is already in consideration.[9] On October 11, 2013, he hinted at the possibility of a 3DS remake at the New York Comic Con, stating that fans may get an answer as to whether one will be released by playing A Link Between Worlds.[10] On November 5, 2014, Nintendo confirmed via their Nintendo Direct that Majora's Mask 3D would be scheduled for a spring 2015 release.

On Miiverse, Eiji Aonuma stated that Majora's Mask 3D had been in development since 2011, shortly after finishing Ocarina of Time 3D.[11]

A special edition New Nintendo 3DS XL featuring a black console with a gold top with Majora's Mask and the four transformation masks is also set be released on launch day of both the game and the new console. In Europe and Japan, it includes a digital copy of the game pre-installed into the system. The Skull Kid figurine is also included when buying the console in the official Nintendo UK store.[12]