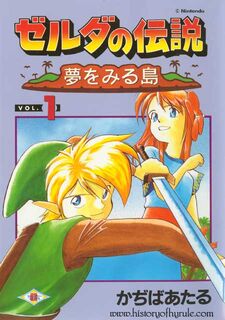 Japan:
• ISBN-13: 978-4-87025-524-1
The Legend of Zelda: Link's Awakening is a manga written by Ataru Cagiva. Although the plot was almost the same there were several differences in the manga when compared to the game it was based on. Most notably this includes Link's fairy companion, Felicia.

Like many of the The Legend of Zelda manga, Link's Awakening has many elements of comedy throughout the story.

The plot of the Link's Awakening manga is very similar to the Game Boy version, albeit going deeper and making Link easier to relate to.

After the first dungeon, Link is met by the Owl, who sends Felicia to assist him and look after him, storing the Instruments Link finds as light until he needs them again. Initially seeing Felicia as a pain due to her cheeky nature, Link proceeds to tease her and show off his abilities whenever he can. After the second dungeon, Link obtains the Ocarina from Madam MeowMeow as a thank-you for BowWow's return. Following this, Link encounters Marin at the beach, who expresses her desire to visit her friends at Animal Village. Immediately, Link agrees to take her, outrunning several enemies which try to attack him.

At this time, the relationship between Marin and Link is shown to deepen beyond the game, showing a clear romantic possibility for the two, Link inviting Marin to accompany him back to Hyrule after his quest. Immediately, Marin agrees, leaving Link to try and complete the rest of his quest as quickly as he can. However, as he fights the boss of Angler's Tunnel, his sword breaks. Although he is able to beat the Angler Fish with his broken sword, it is eventually the cause of his defeat by Karuna, who plunged him off a cliff. However, Link was saved by a ghost he had met outside of Angler's Tunnel, Nakura, who possesses him in order to slow his fall.

Escorting Nakura back to his home, Nakura reveals to Link a sword that he wielded in life, passing the sword onto Link as he departs into the afterlife. Soon after, Link encounters Karuna again, this time quickly killing the pig-warrior before heading to the Face Shrine.

In the Face Shrine, Link learns the truth about Koholint Island: that gathering and playing the Sirens of Awakening will result in both the awakening of the Wind Fish and the destruction of the dream island, Koholint.

Furious with both the Owl and Felicia for not telling him the truth, Link abandons his quest, heading back to Mabe Village to take Marin away with him. Although he extends the offer to Tarin as well, Tarin declines, but allows Marin to go with him. However, the day before they can leave word reaches them that Animal Village is under attack by monsters which seek to stop the awakening of the Wind Fish. Heading there immediately, Link informs them that he is no longer trying to awaken the Wind Fish, but to no avail, as the monsters know that Koholint is a dream, and to them exist two options: be destroyed when the Wind Fish awakens, or continue to fight forever. Due to Link's choice, the second option is chosen. Disgusted, Link moves to dispose of each and every attacking monster before again returning to Mabe Village, setting sail with Marin.

A little after setting sail, the two find themselves unable to pass by an invisible barrier set in the sea. Despite Link's best efforts, Marin eventually convinces him to return to the island, seeing how he is damaging himself for her. Asking Marin why she wanted to leave, Link is met with the reply: It was a dream, and is told that no matter how nice a dream is, eventually one must wake up.

As Marin heads back home, Link is met again by the owl, who asks Link who he is. Link replies thinking this question is dumb that he is Link from Hyrule. The Owl tells him that he is wrong, that there is no such place as Hyrule in this land of dreams, only this island.[3] The Owl also tells him that he is only known as the Messenger of Awakening, not Link, on this island.[4] Saddened, Link realizes that no matter what, he must continue his mission to awaken the Wind Fish, reuniting with Felicia and proceeding onwards.

Getting desperate, the monsters find themselves with only one option, to turn to Master Drona, a warrior who fights for no reason other than fun. While Link is caught in battle with the mighty Hinox, Felicia is kidnapped and taken to the Eagle's Tower. Only moments later, Link is able to best Master Drona with a secret move (Two Step Sword Revolution), dismissing Master Drona's love of combat as unimportant before heading to Eagle's Tower himself, defeating the kidnappers and Evil Eagle and the Grim Creeper, freeing Felicia and proceeding to gather the final two instruments.

As the two stand before the Wind Fish's egg, Link bids farewell to Felicia as he steps inside the egg alone to fight the Nightmare, who identifies itself as the god of Koholint Island. As Link fights the monster, it attempts to mentally subdue him, telling him that the people of Koholint may only survive if he stops fighting.

As Link awakens amidst the rubble of his ship, his old sword returned to him, he contemplates if everything was his own dream before seeing the Wind Fish in the sky. Happily, Link concludes that everything that happened to him was real.

There are many differences between the manga and the game of Link's Awakening. These include: