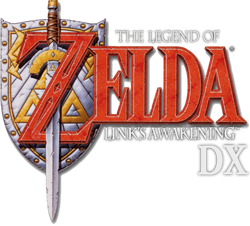 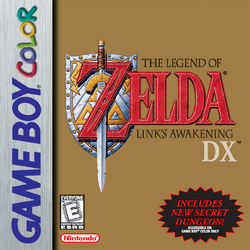 The Legend of Zelda: Link's Awakening DX guide
at StrategyWiki

The Legend of Zelda: Link's Awakening DX for Game Boy Color is an updated re-release of Link's Awakening with several new additions, the most notable of which being the entire game is now in color. It was released just after Ocarina of Time. The engines and color palettes in both of Oracle of Seasons and Oracle of Ages games are likely based on Link's Awakening DX's. It can also be played on a Game Boy, with some features disabled.

Main articles: Camera Shop and The Travels of Link

In northern Ukuku Prairie is a Camera Shop owned by a mouse photographer. At certain times in the game, the photographer will take a photo of Link and the event. The photo can then be viewed at any time in the photo album within the shop, and the photograph will sometimes fade in seven different colors when viewed. There are a total of twelve photographs, and each can be printed by the Game Boy Printer. The Game Boy Printer function does not work with the Nintendo eShop re-release of the game on the Nintendo 3DS, as the original hardware is not compatible with the console anyway.

One of the photographs is taken within the photo shop by asking the photographer to take Link's picture, and he will ask Link several questions if Link wants his photo taken. This photograph actually has an alternate photo. If Link agrees that he wants his photo taken, he will pose with a peace sign. If he answers all of the questions with no, he will be stunned by the camera's flash. There is no way to get both photos in a single game file.

To actually start getting photographs, Link will need to visit the photo shop to get his picture taken. Afterwards, the mouse will give him the photo album. Link will only be able to encounter the other photograph events once he has gotten this photograph and the photo album, else the events would be ignored. The mouse will not take a photo of Link if he has Madame MeowMeow's Chain Chomp, BowWow; or the Blue Rooster following him. If Marin is following him, all photos except those that involve her are inaccessible.

One of the other most notable changes in Link's Awakening DX is the optional, hidden Color Dungeon. Unlike the other dungeons in the game, it is shorter than most. Link can go into the dungeon as soon as he returns BowWow to Madam MeowMeow after clearing the second dungeon, Bottle Grotto.

Although the updated version overall is compatible with previous Game Boy models, the dungeon has many puzzles that are highly based on actual colors, therefore the Color Dungeon cannot be entered when playing Link's Awakening DX on the older models, thus requiring the use of a Game Boy Color.